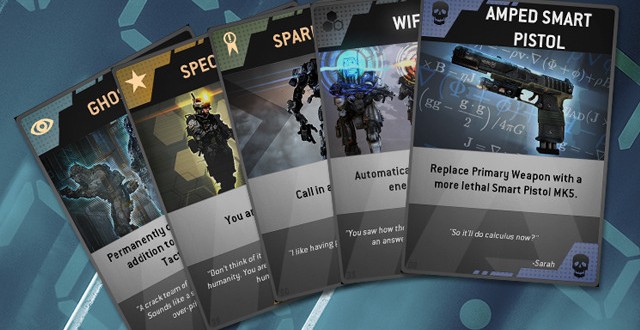 Respawn Entertainment announced that the latest Titanfall update will add several new features including the Black Market. Here you can buy Titan Insignias and Burn Card booster packs, but don’t worry, you wont have to spend real money to do so. The update also introduces new in-game currency called Credits, which can be obtained in several ways. This includes winning a match, completing a match, completing daily challenges, selling Burn Cards, and winning the first game of the day. Also, after you hit level 50 a percentage of the experience you gain every match will automatically be converted into Credits. Once you have enough currency and are at least level 11 Titanfall’s Black Market will be waiting for you.

Every Insignia will cost 25.000 Credits and will show up in the Titan Custom Loadout screen once you unlock it. Glory Blazers, Hell Divers, Apex Predators, Spectral Legion, and Shadow Runners are just some of the Insignias that will be available via the Black Market once the next Titanfall update kicks in. As for the Burn Card packs, prices vary greatly and can cost you anywhere between 5k and 50k Credits. The packs contain random cards and are focused on a specific theme. For example, if you only need XP boosting cards you can buy the Time Boost Pack.

Alternatively, if you just want to spent some Credits without needing any specific cards you can buy the Standard Pack, which can contain any card in the game. The new system also allows you to sell the Burn Cards you no longer need for Credits in order to buy others that you do need. Naturally, while this new system looks rather promising there is some concern among players that Titanfall might be heading towards a microtransaction system. Lead Designer David Shaver dispels these fears however and reiterates that at no point will players be required to spend real money and that Titanfall will not become a pay-to-win game. He also states that Credits can only be acquired by performing in-game tasks and there is not option to buy them with real currency.

“With the introduction of an in-game currency, some may worry that the next step is that we will let players spend real-world money to get an edge in the game. We have stated several times that Titanfall will not have micro-transactions. Fear not, for we plan to keep that promise – NO MICROTRANSACTIONS! The only way to get Credits is by playing the game!”

I’m Load The Game’s co-founder and community manager, and whenever I’m not answering questions on social media platforms, I spend my time digging up the latest news and rumors and writing them up. That’s not to say I’m all work and no fun, not at all. If my spare time allows it, I like to engage in some good old fashioned online carnage. If it’s an MMO with swords and lots of PvP, I’m most likely in it. Oh, and if you’re looking to pick a fight in Tekken or Mortal Kombat, I’ll be more than happy to assist! Connect with me by email markjudge (@) loadthegame.com only
@@MarkJudgeLTG
Previous Sony settles lawsuit over account information theft in 2011
Next EA gives away Sims 2: Ultimate Edition for free