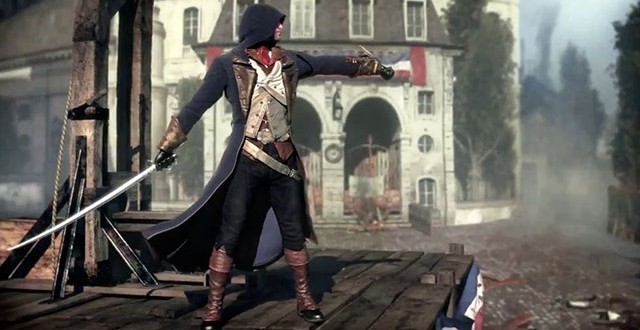 Assassin’s Creed Unity marks the return of the series to the land-based gameplay. The upcoming title will take place in Paris during the French Revolution, Ubisoft revealed earlier this year. One of the first things that stood out for me while watching the E3 2014 demo was the scale of the game. The company did a great job at recreating Paris at the end of the 18th century when the revolution occurred. The city certainly looked realistic enough in the demonstration, but is it even remotely comparable to the real thing? It certainly is according to Ubisoft, which claims that Assassin’s Creed Unity recreates Paris on a 1:1 scale. Producer Lesley Phord-Toy discussed about the size of the game -among other subjects – in an interview with Examiner. A few of his statements can be seen below.

“In previous Assassin’s Creeds, we created Rome and a bunch of other cities. They were a bit cheated in terms of scale. Paris and its monuments are really on a 1:1 scale because you’ll be able to go inside [of buildings] seamlessly with no loading. The actual size of Paris is larger than all of the landmass in Black Flag. The Notre Dame is three or four times the size of the Coliseum. [Assassin’s Creed Unity] is really on a massive scale, and you notice it right away,” the Game Producer said.

Phord-Toy revealed that although most of the action in Assassin’s Creed Unity will take place in Paris, you will be able to leave the city and visit some nearby places such as the Palace of Versailles for example. He also explains just how small, but at the same time powerful you will feel while climbing the huge cathedrals in Paris. “You’ll be climbing these buildings and [notice] you feel so small, but then you also feel extremely powerful [at the same time]. [Paris] just feels like it extends forever,” Phord-Toy said. Elsewhere, the producer also talks about the setting, parkour, and co-op. You can check out the full interview at the original source of this article.

Earlier this month Ubisoft revealed that they plan on making the upcoming title as historically accurate as possible. Given that the game will feature a 1:1 scale of 18th century Paris I’d say they’re definitely on the right track. Assassin’s Creed Unity will be released on October 28th for PS4, Xbox One, and the PC. The company is currently also working on a last-gen title presumably entitled Assassin’s Creed Comet.

I’m Load The Game’s co-founder and community manager, and whenever I’m not answering questions on social media platforms, I spend my time digging up the latest news and rumors and writing them up. That’s not to say I’m all work and no fun, not at all. If my spare time allows it, I like to engage in some good old fashioned online carnage. If it’s an MMO with swords and lots of PvP, I’m most likely in it. Oh, and if you’re looking to pick a fight in Tekken or Mortal Kombat, I’ll be more than happy to assist! Connect with me by email markjudge (@) loadthegame.com only
@@MarkJudgeLTG
Previous Release date for Middle-earth: Shadow of Mordor brought forward
Next Evolve Alpha invites are almost three weeks late already