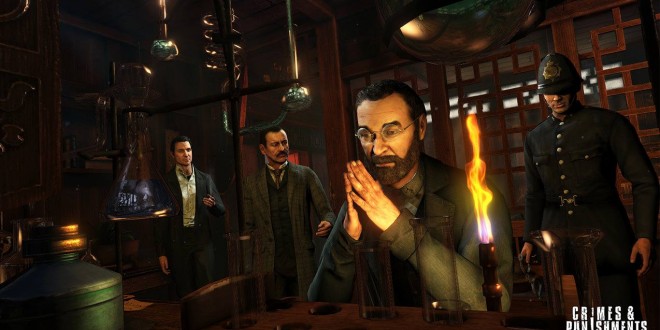 Sherlock Holmes: Crimes & Punishments is set to be released on September 2 this year. The game’s publisher, Focus Home Interactive has decided to release a 23 minute trailer of the game you can find here in order to present one of the six cases you will be solving in the game.

In the gameplay, we play the character of Watson narrated by one of the developers of the game. We learn that the case the trailer shows us will not contain spoiler or ruin any part of the full game we will  probably be able to acquire by the end of September. Immediately, we notice the fairly good quality graphics, textures and motion, with lots of details worked into the environment and into the characters themselves. Sherlock Holmes’ study is beautifully colored and textured and infinitely exploitable by the characters. The game menu reminds me of  Bloodrayne somehow, but it is a simple game menu decorated with minor details and simplistic design, leaving your focus concentrated on the game rather than on tackling the menu.

One of the things I find interesting in the game is that the characters respond to your attire design and attire actually plays a role in the game, as disguise and as a communicating factor. The overall atmosphere of the game, including soundtrack and sound effects create a pleasant gaming environment with exquisite detail built into gardens, buildings, facial expressions and movement as well, helping you immerse yourself in the beautifully designed world of Sherlock Holmes. The game offers you the possibility of analyzing the characters’ bodies piece by piece, including clothing, jewelry, accessories, injuries, letting you deduce whether a person is telling the truth or if they are hiding something. You have this option with other items in the game as well, much like a magnifying glass that highlights the details you were unable to see with the naked eye. When you pick up an object for the purpose of examining, you have a 360 angle you can toy with to see and use any clue you might find on the item.

The “Deduction Space” gathers clues and if you associate them correctly, they form a deduction, which leads to a task you have to complete. From there, you have to investigate every little section of the game repeatedly, as you gradually get closer to the truth by uncovering more and more clues and evidence. You have to keep in mind, that everything is important. The game combines action, adventure, puzzle and arcade into one, being suitable for fans of multiple genres and even for those who are picky when it comes to POV and voice acting as well. You need to think complexly and logically, using deduction and association to solve your mystery. Overall, Sherlock Holmes: Crimes and Punishments is an entertaining  game which keeps you on your toes the whole time playing.

My life-long dream has been to test out every gadget on the market! Considering the fact that I've rapidly destroyed almost every gadget I've had so far, I'm not inclined to owning something, so my ideal outcome would be to have a different gadget each month. I'm really into smartphones, wearables and tablets and I love Playstation and Xbox, I'm sure I'll beat you at your own game (after a month of training... or two)
Previous Weekly Tech Digest – This week’s technology news
Next Air Waveguide – optical cable out of thin air