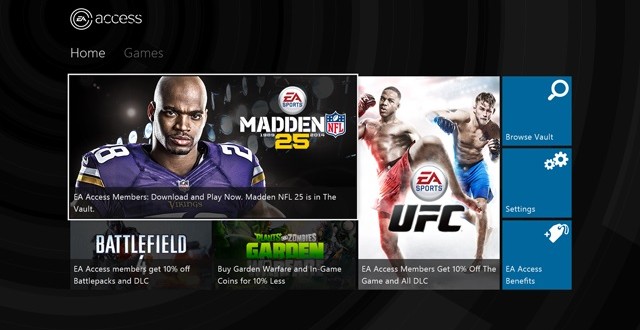 EA has announced that they are launching a brand new game subscription service called EA Access. The service, a partnership between EA and Microsoft, will offer Xbox One users the chance to pay a subscription fee to gain access to a variety of games from the publisher. “At EA, we are always looking for new ways to make it easier for gamers to play more EA games across all platforms,” said EA in a blog post on their official site. “And we are excited about what EA Access will offer to players on Xbox One. This is something we’ve never done before and we’re excited to share it with you.”

The first set of games that will be made available to subscribers are FIFA 14, Madden NFL 25, Peggle 2 and Battlefield 4. EA has also confirmed that there will be more and more titles added over time. The subscription service will provide gamers with access to any available titles “at the click of a button” for an unlimited amount of time.

EA Access also provides gamers with a number of other benefits. Chief among them is a discount on all digital content from EA on the Xbox One, giving users a 10% saving on downloadable content. It will also give subscribers the chance to play trial versions of upcoming games before they are released. According to EA, this will start with allowing users to play Madden NFL 15, NHL 15, FIFA 15, NBA LIVE 15 and Dragon Age: Inquisition five days before their release date.

The service is currently only available to a select number of beta testers but is expected to launch globally soon. It will cost $4.99 per month or can be purchased as an annual membership for a discounted price of $29.99. EA Access will be available to buy from GameStop in the US, GameStop and Amazon in Europe and EB Games in Canada.  There is no word on whether it will be available to purchase directly through Xbox Live.

Freelance writer with a love for gaming. Have owned pretty much every console and handheld from the last 15 years. When I'm not writing about games, which I am most of the time, I tend to be reading, writing about sport, binge watching shows on Netflix...or playing the odd video game.
@nathanpgibson
Previous Reports indicate Microsoft has two new smartphones ready to launch
Next Call of Duty Advanced Warfare features three Collector’s Editions