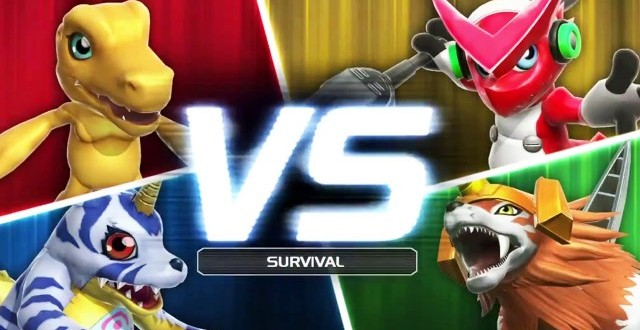 Many of us are all too familiar with Digimon and have spent probably hundreds of hours watching the series as kids. I, myself, have even watched all the episodes again in my late teens out of nostalgia and strangely enough, it was more fun when I saw them the second time. But Digimon is not only about the anime, there are also several video games featuring the popular digital monsters. Unfortunately most of them range from forgettable to downright awful, but Namco Bandai plans on changing all that. The company announced Digimon All-Star Rumble, a multiplayer focused 3D game that features 4-player combat and a rooster comprised out of the most popular digital monsters including Agumon, Gabumon, and many others.

“In DIGIMON All-Star Rumble the Digital World enjoys a time of restored peace after overcoming numerous wars and crises. However, Digimon must battle to Digivolve, so the restless Digimon propose to hold their first ever “Digimon Evolution Tournament” to determine who is the strongest of them all. In the vivaciously competitive tournament, up to four players will be able to select from a roster of 12 popular base Digimon characters and play as a total of 32 Digimon forms pulled from every Digimon series ranging from Digimon Adventure to Digimon Fusion. Players control these digital monsters and battle for supremacy in the main Versus Battle mode that players of all skill levels will be able to pick up and enjoy.”

Players will reportedly be able to Digivolve mid-battle into their more powerful versions, although the requirements for evolving haven not been revealed just yet. Actually, there are plenty of details we still don’t know but we can get the basic idea from the trailer. The graphics and animations look a bit outdated to be honest so hopefully the game’s strength will come from its gameplay. Digimon All-Star Rumble will be released on November 11th for Xbox 360 and PS3.

I’m Load The Game’s co-founder and community manager, and whenever I’m not answering questions on social media platforms, I spend my time digging up the latest news and rumors and writing them up. That’s not to say I’m all work and no fun, not at all. If my spare time allows it, I like to engage in some good old fashioned online carnage. If it’s an MMO with swords and lots of PvP, I’m most likely in it. Oh, and if you’re looking to pick a fight in Tekken or Mortal Kombat, I’ll be more than happy to assist! Connect with me by email markjudge (@) loadthegame.com only
@@MarkJudgeLTG
Previous Kaspersky and Symantec banned in China
Next Mortal Kombat X leaked images confirm that Kano will return as a playable character