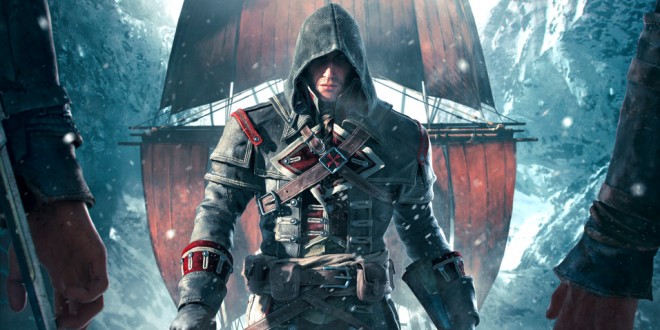 Ubisoft’s Assassin’s Creed: Unity has been at the center of attention lately, but the company isn’t ignoring previous-gen console owning Assassin’s Creed fans either. Up until now, we’ve seen some CGI trailers for Assassin’s Creed Rogue, but thanks to a new Gamescon reveal, we finally get a good glimpse at what the upcoming Xbox 360 and Playstation 3 game looks like. As was the case with Assassin’s Creed IV: Black Flag, Rogue also brings a mixture of naval and ground combat, providing a good amount of diversity in its gameplay.

The game looks surprisingly good. At this point though, things won’t be getting any better. After all, all the potential power of the Xbox 360 and PS3 has been utilized by now, and most developers are moving away towards the newer generation consoles. That being said, water and shadow effects are great, and the general level and graphical design of Assassin’s Creed Rogue looks rather appealing. Rogue represents the first title in the series to place players behind a Templar rather than an assassin, albeit the protagonist still seems nimble enough, and is definitely well versed in the art of killing, jumping, free-running and that sort of thing.

We’ll be playing as Shay Patrick Cormack, and the game is set during the 7 years’ War, a war that took place in North America, mid 18th century. Colonial forces clash, and we’ll be smack in the middle of things. The trailer shows off multiple new gameplay elements. The most striking difference when compared to Black Flag is how fast and easy to maneuver  Shay’s ship, the Morrigan, is. While realistically turning a ship at those speeds wasn’t really possible at the time, a little suspension of disbelief and we’re going to be treated to a much more dynamic (and hopefully engaging) combat experience. There are a number of new features, skills, weapons and combat elements to spice things up, but I suggest watching the trailer for a better summary of what’s to come.

Old-school gamer with a cheeky tongue that gets me in trouble. When I'm not playing games, I'm writing about them, preferably in the vicinity of a fridge! Oh, and if you're a Justin Bieber fan, I'm afraid we can't be friends!
Previous Apple banned the use of dangerous chemicals in iPhone production
Next Xiaomi MIUI 6 revealed – beta testers wanted