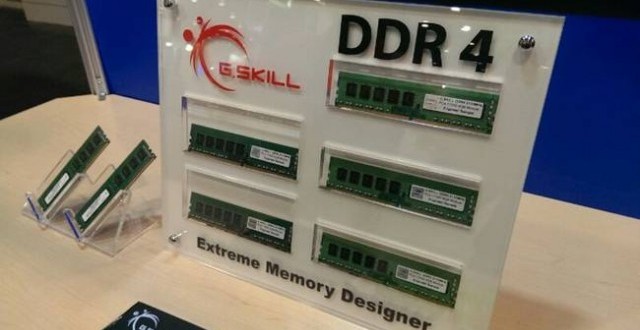 DDR4 RAM will be very expensive at launch, shipments begin this month

The next generation of Random Access Memory is almost here. Well, in truth, DDR4 has been around for a while but it will only become available to the general public later this month. DDR4 is expected to exceed DDR3 frequencies, but at the same time it will use up less power than its predecessor. Most launch models will only end up only drawing about 1.2V. If the next generation of RAM is more powerful but less power hungry than this could only mean one thing: it’s going to cost an arm and a leg to buy. Alright, so maybe I’m exaggerating just a tiny bit, but it will certainly cost a lot more that DDR3 currently does.

At the moment only Corsair and Crucial seem to be taking pre-orders for DDR4 kits. Prices start somewhere around the $260 mark for a 2X8GB kit and can go up to $520 for a 4x8GB kit at Crucial. Interestingly enough, the price listings are the same regardless of frequency, which is a bit odd to say the least. One would expect a 2400 MHz DDR4 kit to be more expensive than a 2133 MHz one, but anyway. Corsair prices are even higher, but they also offer 2666 and 2800 MHz kits so it’s only natural that they should cost a bit more. Also, they’re based in the UK so you’ll also end up paying taxes if you want your DDR4 delivered in other regions.

The new generation of RAM is unsurprisingly more expensive than the previous one, but the prices will likely start going down a few months after launch. Just so you can get a better idea, a DDR3 2X8 GB kit currently costs about $155 while a 4X8GB one sits around $315. While the DDR4 can already be pre-ordered, they are only expected to arrive at the end of the month. My advice, wait a bit until the prices drop before considering a purchase, but the decision is ultimately up to you.

I’m Load The Game’s co-founder and community manager, and whenever I’m not answering questions on social media platforms, I spend my time digging up the latest news and rumors and writing them up. That’s not to say I’m all work and no fun, not at all. If my spare time allows it, I like to engage in some good old fashioned online carnage. If it’s an MMO with swords and lots of PvP, I’m most likely in it. Oh, and if you’re looking to pick a fight in Tekken or Mortal Kombat, I’ll be more than happy to assist! Connect with me by email markjudge (@) loadthegame.com only
@@MarkJudgeLTG
Previous Xiaomi MIUI 6 revealed – beta testers wanted
Next Samsung Galaxy Note 4 priced and already for sale Razer is known for its gaming peripherals. Corsair, not so much. Within this Keyboard comparison ...