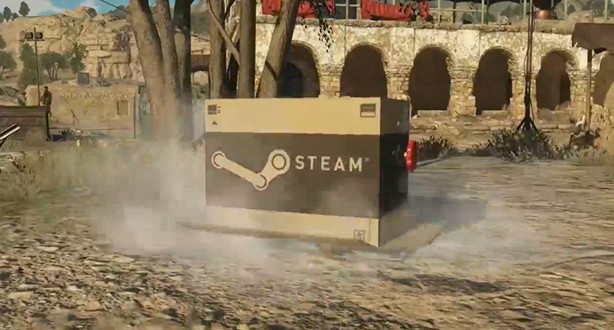 Metal Gear Solid 5: The Phantom Pain is coming to PC via Steam

Remember when we reported that PC gamers were asking Hideo Kojima for a version of Metal Gear Solid HD for their platform of choice? Well, Kojima still hasn’t replied, but there’s even better news. Konami revealed on their website yesterday that both Metal Gear Solid 5: Ground Zeroes and Metal Gear Solid 5: The Phantom Pain will have a PC release and be available on Steam once they do. However, it seems that this announcement was supposed to be made at a special event hosted by Kojima himself at Gamescom. Although the press release containing the announcement was later removed from the site, a snippet of the big reveal can still be found online.

“Tonight’s MGSV:TPP Preview Show revealed; with a twist of METAL GEAR SOLID humor, that MGS5: THE PHANTOM PAIN and GROUND ZEROES will be available on Steam, release date yet to be disclosed. The event featured a surprise message from Kiefer Sutherland; the voice of ‘Snake’, announcing an exclusive Gamescom pre-order deal. Fans who attended received vouchers offering a 5 EURO discount on the PlayStation4 and Xbox One versions of MGSV:TPP. This pre-order deal is also available at the KONAMI booth (Hall 7.1) – so if you’re planning to visit gamescom, be sure to swing by! We’ll be announcing more pre-order deals over the next few months, stay tuned.”

Sure enough, Hideo Kojima confirmed at the said event that Metal Gear Solid 5: The Phantom Pain and Ground Zeroes will indeed land on the PC. Konami even went ahead and created a video of Snake sneaking around in a Steam themed cardboard box. “I’m really happy you guys are so excited with the cardboard boxes,” Kojima said. “And yes, it’s coming to Steam.” He also mentions that players will be able to use the box as an actual in-game item. Unfortunately he didn’t reveal a possible released date for the PC versions of the Metal Gear Solid 5 titles, or any other major details for that matter. But the press release did say that pre-order deals will be announced over the next few months so maybe the release date will also be revealed then.

In other news, Hideo Kojima is working together with film director Guillermo del Toro on the next Silent Hill title, simply called “Silent Hills”. There are few details at this time, but the demo revealed that Norman Reedus will be the game’s protagonist. Reedus is perhaps best known for his portrayal of Daryl Dixon in The Walking Dead TV series.

I’m Load The Game’s co-founder and community manager, and whenever I’m not answering questions on social media platforms, I spend my time digging up the latest news and rumors and writing them up. That’s not to say I’m all work and no fun, not at all. If my spare time allows it, I like to engage in some good old fashioned online carnage. If it’s an MMO with swords and lots of PvP, I’m most likely in it. Oh, and if you’re looking to pick a fight in Tekken or Mortal Kombat, I’ll be more than happy to assist! Connect with me by email markjudge (@) loadthegame.com only
@@MarkJudgeLTG
Previous Choose you smartphone wisely: iPhone 5s or Samsung Galaxy S5?
Next DayZ coming to the PS4, this will help the game’s PC version says Dean Hall

While Telltale Games’ critically-acclaimed The Walking Dead series has come to an end, there are ...