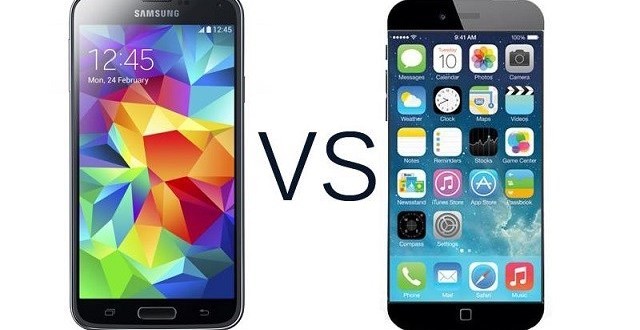 The iPhone 6 is widely considered to be the most anticipated smartphone ever developed by Apple and they know it. Rumor has it that the Cupertino-based company already ordered between 70 million and 80 million devices in preparation for its launch so clearly they expect to sell plenty of units. But, as anticipated as it may be, the upcoming phone will face some pretty fierce competition in the form of several Android devices that already have a well established place on the market. The iPhone 6’s main competitor this Fall will likely be the LG G3, a flagship that sold incredibly well ever since it made its worldwide debut back in June. But prior to the G3 there was yet another flagship that was considered to be the most popular smartphone around for several months: the Samsung Galaxy S5.

While the Korean company will soon launch the metallic Galaxy Alpha in the hopes of competing with the iPhone 6, this device is only considered to be mid-range by many so it isn’t likely to steal many customers away from Apple. On the other hand, technically speaking the Samsung Galaxy S5 is still their flagship and it’s superior in many ways to the Alpha. Sure, the company will also release the Samsung Galaxy Note 4 soon, but the “phablet” will not compete directly with the smaller iPhone 6 as it’s in a whole different class. I believe the S5 is still the company’s best chance of going head-to-head with Apple’s flagship because even though it was launched a while ago, it’s not even close to being outdated and is definitely still very popular. With that in mind, let’s take a look at what each device brings to the table. Naturally, the iPhone 6 is not out yet so everything we know comes from leaks and rumors. And though a lot of the info come from very reliable sources, I advise you to take it with a grain of salt nevertheless.

First off, the consensus is that Apple will launch two variants of the flagship, one featuring a 4.7-inch display while the other will sport a 5.5-inch one. As far as we know only the former will launch next month so we will be comparing the Samsung Galaxy S5 with this device and leave the comparison with the 5.5-inch one for another time. The S5 comes equipped with a 5.1-inch display so it immediately wins in terms of screen size, but we know that bigger isn’t always better. However, the device’s 1080 x 1920 resolution is also arguably better than the iPhone 6’s 960 x 1704, although the pixel count difference is pretty small – 432 ppi vs 416 ppi. While the S5’s screen will probably be considered better by some, the truth is that Apple’s flagship features something more useful than a huge panel. The device comes equipped with shatter proof Sapphire glass screen, which makes it incredibly resistant from the tests I’ve seen. All in all, I’ll have to say that the iPhone 6 is better in terms of display as it brings something new to the table and will probably set the new standard when it comes to screen protection.

Now let’s take a quick peak under the hood shall we? We don’t have all the details regarding its processor, but the handset is said to feature an A8 chipset with dual-core CPU running at 2GHz. Certainly an improvement over the A7 found on the iPhone 5s, but Apple’s upcoming flagship is unlikely to match the processing power of the Samsung Galaxy S5 as the smartphone comes equipped with a powerful Qualcomm Snapdragon 801 quad-core @ 2.5 Ghz. In terms of memory, both devices should be more or less evenly matched as they both come with 2GB of RAM and up to 128 GB internal storage memory. However, we need to note that the iPhone 6 doesn’t feature a microSD card slot so you’ll have to buy the most expensive variant of the phone if you want 128GB worth of storage. On the other hand, the Samsung Galaxy S5 does come with a card slot, but only offers 16GB/32GB memory options. It all boils down to preference in the end so I can’t declare a winner in terms of memory, but the S5 definitely wins when it comes to processing power.

In regards to the camera, the 4.7-inch iPhone 6 is said to come with an 8MP primary shooter similar to the one found on the iPhone 5s. By comparison, the Samsung Galaxy S5 sports a 16MP camera with more features than we expect to find on its competitor so no real contest here. The device also wins when it comes to battery life with its 2,800 mAh Li-Io compared to the iPhone 6’s rumored 1.850 mAh non-removable Li-Po battery. At first glance, Samsung shouldn’t have too much trouble beating Apple when it comes to specs, but iPhones aren’t known for their impressive hardware anyway so this shouldn’t be too surprising. The real battle will be between the operating systems as this will also be a popularity contest at the end of the day. Android owners greatly outnumber iOS users, but the latter are way more vocal about their preference and most of them are very loyal to Apple. The company certainly knows this which is why they ordered so many units ahead of time knowing that the iPhone 6 will sell like hot cakes even though the device is arguably inferior to many other flagships.

However, we also need to note that the smartphone is expected to run on the latest version of Apple’s operating system, iOS 8, while the Samsung Galaxy S5 is still waiting for the Android 4.4.3 update. The handset will probably not receive Android L any time soon which means that the iPhone 6 will win the popularity contest as it offers something new and is therefore more sought after. People are curious by nature and want to hear all about the new stuff so the fact that Apple is equipping their flagship with the latest version of the OS will definitely be a strong selling point. The last important aspect that needs to be taken into consideration is the price tag. The Samsung Galaxy S5 currently costs about $650 for the 16 GB version and $700 for the 32 GB model unlocked. The 4.7-inch iPhone 6 is expected to be substantially more expensive with prices starting at around $850 for the 32GB variant and only going up from there.

Bottom line? The Galaxy S5 offers overall better performance and comes at a pretty standard price for a flagship so it should technically win this battle. However, the iPhone 6 is the next big thing and comes with increased shock resistance as well as the new iOS 8. These will be key selling points for Apple and the device is certain to fly of the shelves on launch day even though it’s more expensive than most other flagships. Overall, I’d say the Galaxy S5 will be the better device, but a lot of people are likely to say “Galaxy S what?” once the iPhone 6 comes out and the hype train is in full throttle.

I’m Load The Game’s co-founder and community manager, and whenever I’m not answering questions on social media platforms, I spend my time digging up the latest news and rumors and writing them up. That’s not to say I’m all work and no fun, not at all. If my spare time allows it, I like to engage in some good old fashioned online carnage. If it’s an MMO with swords and lots of PvP, I’m most likely in it. Oh, and if you’re looking to pick a fight in Tekken or Mortal Kombat, I’ll be more than happy to assist! Connect with me by email markjudge (@) loadthegame.com only
@@MarkJudgeLTG
Previous Robin Williams will appear in World of Warcraft as an NPC
Next Nexus 5 vs Nexus 6 – Ready for an upgrade?