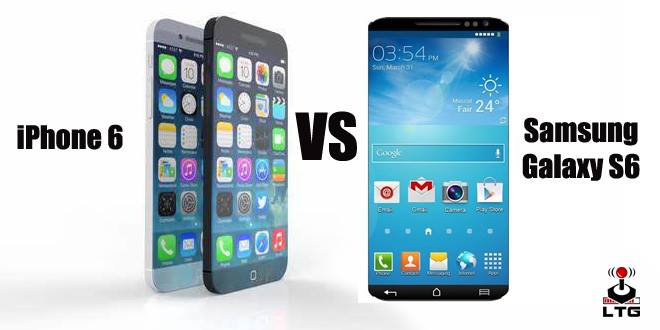 iPhone 6 vs Samsung Galaxy S6 – The next generation

While the Samsung Galaxy S5 is far from being outdated, it’s slowly losing popularity due to the host of new devices coming out next month. People are always looking for the next big thing and that’s definitely not the S5 anymore. Samsung has been steadily losing customers after the LG G3 was released and they will surely lose even more once Apple’s iPhone 6 is launched. Sure, the Korean giant is launching one of their own highly anticipated devices in the form of the Samsung Galaxy Note 4, which will sway some customers back to their side, but ultimately more people are in the market for a smartphone than a “phablet.” Their new metallic Galaxy Alpha smartphone is pretty good, but it’s unlikely to seriously compete with the iPhone 6.

What the company really needs to go head-to-head with Apple is the next generation Galaxy S flagship, the Samsung Galaxy S6. Normally I would say that we shouldn’t expect to see the device any time soon given that both the S4 and the S5 were released in late Q1 of 2012 and 2013, respectively. However, rumor has it that the company isn’t too happy with their sales as of late and are adopting a more aggressive strategy in order to make sure they don’t fall behind their competitors. This includes not only announcing the Samsung Galaxy Note 4 in September, but also launching it during the same month. That being said, it’s possible that the Korean giant might also launch the Samsung Galaxy S6 a bit early to compensate for the poor sales of the S5 during the third quarter of this year.

Needless to say, Samsung hasn’t confirmed anything in regards to the S6 as of yet, but there are certainly plenty of rumors floating around. Similarly, the iPhone 6 has also been the subject of many rumors and speculations with the most interesting one being that Apple will release two variants of their popular flagship this year. Although common knowledge by now, this is interesting because each model will compete with a similar device coming from Samsung. First, the 4.7-inch iPhone 6 is likely to compete directly with the Samsung Galaxy S6, which is said to come with a 5.2-inch panel, just a small increase compared to the S5’s 5.1-inch screen. We’re unlikely to see a bigger display as they already have a large device in form of the Samsung Galaxy Note 4, which comes in at 5.7-inch and will compete with the 5.5-inch iPhone 6 as well as the LG G3 given that it also measures 5.5-inches.

So the competition will take place on two different fronts, but who will win? Well, for the sake of this comparison we’re mostly interested in the 4.7-inch iPhone 6 vs Samsung Galaxy S6 battle so let’s take a look at what rumors are floating around.For the longest time Apple’s smaller flagship was said to feature a shatter proof Sapphire glass display with 960 x 1704 pixel resolution, but some more recent reports are only claiming 828 x 1472. The Samsung Galaxy S6 on the other hand is rumored to sport a QHD 1440 x 2560 resolution similar to the LG G3, although the more optimistic reports are saying that 2160 x 3840 is also a possibility. The later might be a bit of a stretch, but the former is definitely feasible and very likely to be actual resolution if you ask me. The flagship might also feature a flexible glass display, which would be very interesting to see indeed.

On the hardware side, the most recent rumors about the iPhone 6 claim that we’re bound to see the device equipped with Apple’s new dual-core 64-bit A8 processor running at 2 GHz. Some other specs should include an 8MP primary camera with OIS, 2 GB of RAM, 1810 mAh battery and 16/32/64/128 GB internal storage memory options without microSD card support. While the larger version is said to come with better specs, the small iPhone 6 is definitely also an improvement over the current model. However, Samsung is well-known for offering some of the best devices around when it comes to hardware so we can expected them to equip their upcoming flagship smartphone with truly impressive specs. Best case scenario includes the next generation 64-bit Qualcomm Snapdragon 810 octa-core processor, 16MP or 20MP primary camera, up to 128 GB of storage with microSD support and 3,300 mAh battery.

In terms of the operating system, the iPhone 6 is pretty much guaranteed to run on the upcoming iOS 8, which is scheduled to launch this Fall. The OS comes with features such as iCloud Drive cloud storage, integrated Wi-Fi calling, Health Apps, QuickType, and Tips App among others. The Samsung Galaxy S6 will most likely run on the Android L as the latest version of the OS will definitely be released by the time the device comes out. Samsung has their own operating system called Tizen, but this will probably be reserved for wearable devices seeing as how the first Tizen-based smartphone, the Samsung Z has yet to be launched and rumor has it that we shouldn’t expect to see it any time soon.

It’s difficult to pinpoint a release date for the Samsung Galaxy S6, but as mentioned, it is believed that Samsung will launch both their upcoming flagship smartphone and phablet a bit sooner than the previous versions. The Galaxy S5 made its debut back in April so its successor is said to arrive around March or even late February 2015 if we’re lucky. The iPhone 6 on the other hand will be announced in a matter of weeks at an Apple event scheduled to take place on September 9th. Some believe the device will not only be announced then, but also launched. However, most sources claim that this is just wishful thinking and we shouldn’t expect to see the flagship sooner than September 19th. The 5.5-inch iPhone 6 is also said to be announced on September 9th, but this larger version will probably only launch later this year or even in early 2015 as to not enter direct competition with the Samsung Galaxy Note 4 from the get-go.

iPhones have traditionally been more expensive than Android devices and we shouldn’t expect this to change any time soon. The iPhone 6 will cost no less than $850 for the 32 GB version according to most media outlets, which is pretty standard all things considered. Meanwhile, it’s hard to say anything about a possible price for the Samsung Galaxy S6, but it should stay relatively close to the price of the Galaxy S5, meaning $650 for the 16GB version and $700 for the 32GB model. We might see an increase in cost depending on how many improvements Samsung throws at it, nothing too crazy though.

Bottom line? We’ll refrain from declaring a winner this time around as it’s too early to know exactly what each device will bring to the table. The Samsung Galaxy S6 is certain to come with more processing power, display resolution and camera capabilities than the iPhone 6, but this is nothing out of the ordinary. Apple will once again rely on customers who prefer iOS instead of Android to sell millions of units and we can’t really blame them for than. The iPhone 5s was the best selling smartphone in 35 countries by the end of May with the Galaxy S5 coming in closely behind on second place. The next generation of flagships might end up ranking similarly, but we’ll just have to wait and see.

I’m Load The Game’s co-founder and community manager, and whenever I’m not answering questions on social media platforms, I spend my time digging up the latest news and rumors and writing them up. That’s not to say I’m all work and no fun, not at all. If my spare time allows it, I like to engage in some good old fashioned online carnage. If it’s an MMO with swords and lots of PvP, I’m most likely in it. Oh, and if you’re looking to pick a fight in Tekken or Mortal Kombat, I’ll be more than happy to assist! Connect with me by email markjudge (@) loadthegame.com only
@@MarkJudgeLTG
Previous ‘Destiny’ writer Joshua Rubin leaves Bungie for Telltale’s Game of Thrones
Next Minecraft PS4 has been delayed, unlikely to release this month