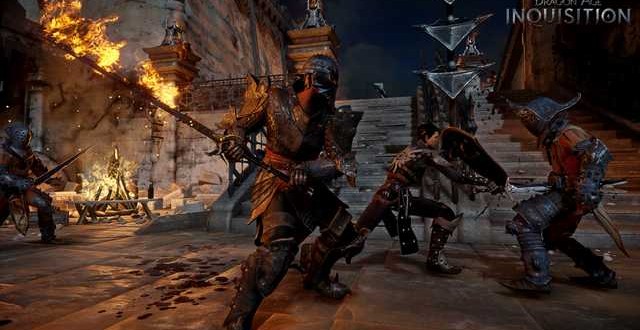 Dragon Age Inquisition is undoubtedly one of the most anticipated games of the year along with other big hitters like Assassin’s Creed Unity, Sunset Overdrive or Civilization Beyond Earth. Bioware shared new details about their upcoming game at a steady pace these last few months, but there’s so much we still don’t know yet. Luckily, the company takes the time to sit down with fans and answer some of their questions every once in a while, just like they did yesterday. This time around the Q&A session was all about the combat in Dragon Age Inquisition, which is arguably one of the most important aspects in any RPG. From what we can tell combat has seen some improvements over the previous title, but for some reason it’s still a big step back compared to the first game in the trilogy, Dragon Age Origins.

Some rather disappointing news comes from the fact that there will be no weapon or armor decay. According to Bioware, “Thedosian merchants give their products lifetime guarantees, which was a pretty shrewd business move what with the apocalyptic sky-hole.” That’s just a fancy way of saying “we want to keep the game simple” if you ask me. Moreover, Bioware decided to restrict the weapons to certain classes yet again. Many fans of the series complained about this particular aspect when Dragon Age 2 came out so I’m a bit surprised that it’s making a comeback in Dragon Age Inquisition. “Class-restricted, though our animators provided some beautiful variant attack styles within each melee weapon set. For instance, rogues perform different attacks depending on whether they’re armed with single- or double-bladed daggers,” says Bioware.

Speaking of dual-wielding, this feature will not be available to warriors even though common sense dictates that it should. Warriors will only be able to choose between two-handed or weapon and shield in Dragon Age Inquisition. I’m pretty sure that many people who were planning on creating a warrior character will be upset about this piece of news. One the other hand, Bioware hints that Arcane Warriors (a combination between warrior and mage) will return, albeit not necessarily under that name. “Something similar will exist, but we’ll get to that a bit later on.” The company also revealed that there is no health regeneration between battles, but stamina and mana will regenerate.

Dragon Age Inquisition will be released on November 20th for Xbox 360, Xbox One, PS3, PS4, and the PC.

I’m Load The Game’s co-founder and community manager, and whenever I’m not answering questions on social media platforms, I spend my time digging up the latest news and rumors and writing them up. That’s not to say I’m all work and no fun, not at all. If my spare time allows it, I like to engage in some good old fashioned online carnage. If it’s an MMO with swords and lots of PvP, I’m most likely in it. Oh, and if you’re looking to pick a fight in Tekken or Mortal Kombat, I’ll be more than happy to assist! Connect with me by email markjudge (@) loadthegame.com only
@@MarkJudgeLTG
Previous A new Assassin’s Creed game was released on the iOS
Next The Walking Dead game season finale release date announced