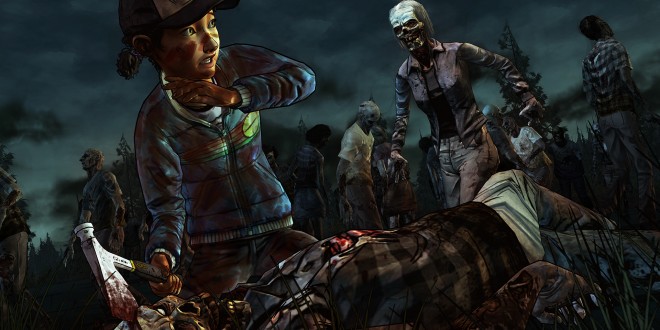 Telltale Games released a trailer for the season finale of their “Walking Dead” series and announced the release dates for the episode.

The new trailer features a summary of the game so far from Clementine’s perspective. It focuses mostly on her choices throught the second season and her relationship with Lee during the first season. According to the developer, the video also contains an exclusive scene created specially for the trailer. The scene features Clementine, still at her house, being filmed by her babysitter as she tells her parents, over the phone, that there is a raccoon in the tree house. The trailer ends with the punchline “Who will you become?” indicating that everything has been leading up to this moment, where Clementine has to make a crucial choice. How things will unfold and what that choice is going to be depends on the players’ actions during the past games.

Although there aren’t any scenes from episode 5 in the trailer, Telltale has announced some elements of the plot. Winter is coming and the survivors need to find shelter and food as fast as possible. The developer hints that walkers will be a greater threat than ever now that the group also needs to take care of the newborn. It is also specified that the players’ choices will decide Clementine’s fate in the finale. You can watch the trailer below and leave your impressions in the comments. Before you press play, be warned that it contains spoilers from all the “Walking Dead” games released so far.

I'm a journalism graduate and an occasional gamer. As a kid I used to own a NES clone called "Terminator 2", which was hugely popular in my country. I like old school games and adventure games but I occasionaly play RPG's and Shooters as well, though I wouldn't call myself an expert at these kinds of games. When I'm not writing or playing games I prefer reading detective or fantasy novels.
Previous Bioware reveals more details about combat in Dragon Age Inquisition
Next Dota 2 combined with Pokemon is a thing now