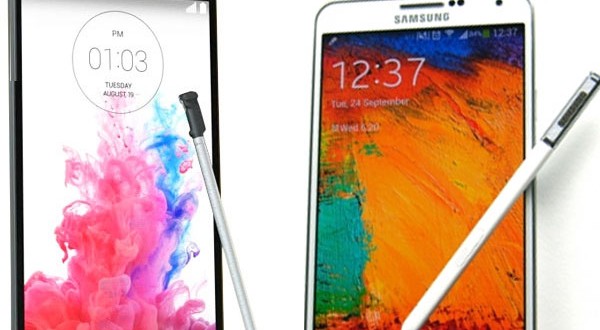 This year’s edition of the IFA Trade Show is bound to be a very exciting one as pretty much all the important companies from the industry will be there to present their latest products. Of course, this happens every year, but this year competition has been particularly fierce so everyone is trying even harder to prove that their devices are better than those of their competitors. One of the most anticipated devices at the IFA will be the Samsung Galaxy Note 4, the smartphone/tablet hybrid which is part of a series that traditionally didn’t have any real direct competition. However, lately a lot of companies have been producing smartphones with large displays that almost rival the “phablet” and now someone built a device specifically designed to provide an alternative to the Samsung Galaxy Note 4. This device is called the LG G3 Stylus.

While LG’s latest flagship can also be considered a rival to the Note 4 because of its huge 5.5-inch display, the smartphone doesn’t come with one of the most important features of a tablet, the stylus pen, also known as the S pen. Because of that very reason LG decided to create a modified version of the LG G3 and equip it with this important tool so that it can sway some customers from the Samsung Galaxy Note 4. This will definitely not be a fair fight as Samsung is launching a high-end device that aims to blow all the possible competitors away with its beautiful display and superior specs. However, LG has a very different strategy that might end up being very successful in the long run. The LG G3 Stylus will not come with high-end hardware, but it is expected to come with a lower price tag, which makes it a cheap alternative to the Note 4.

Granted, cheaper is not better, but most people are definitely taking a good look at their wallets before purchasing a smartphone or tablet so a lower price will likely seem very appealing to those who want a phablet without having to pay an arm and a leg for it. With that in mind, we figured a comparison between the two might help you decide if you are better off with the high-end veteran or the mid-range newcomer. First off, we need to take a look at their displays as this is one of the most important aspects of any device. The LG G3 Stylus sports a 5.5-inch display just like the regular model, but the resolution was lowered significantly down to only 540 x 960 pixels and 200 ppi. One the other hand, the Samsung Galaxy Note 4 makes no compromises and offers a 5.7-inch screen complete with 1440 x 2560 resolution and 515 pixel density. Needless to say, the Note 4 wins this round hands down.

On the hardware side, Samsung’s phablet will come equipped with either a Qualcomm Snapdragon 805 quad-core processor running at 2.5GH Krait 450 or an Exynos 5433 octa-core CPU with four Cortex A-53 cores and four Cortex A-57, depending on the variant. The Samsung Galaxy Note 4 will also feature 4GB of RAM, 16MP primary camera and 16/32/64 GB storage options with a microSD card slot good for up to 128 GB of additional storage. By comparison, the LG G3 Stylus sports a still to be announced 1.3GHz quad-core processor, 1 GB of RAM, 13MP rear-facing camera and 8 GB internal storage memory with microSD support. Again, the Samsung Galaxy Note 4 wins by far, but we also have to take into consideration the battery and there’s not much info regarding this unfortunately. However, it is believed that we should see at least a 3,300 mAh battery on the Note, which is just a bit bigger than the LG G3 Stylus’ 3,000 mAh battery.

In regards to the operating system, LG announced that the Stylus will run on Android 4.4.2 KitKat with the custom UX user interface. The Samsung Galaxy Note 4 will also run on Android, albeit on a more recent version, namely 4.4.4 KitKat. Of course, we’re more curious to see which one of them will end up upgrading to Android L. Both Samsung and LG are known for taking their sweet time when it comes to updates and even their flagship smartphones are currently still running on 4.4.2. Finally, we need to take into consideration the price as that’s the main focus of this comparison at the end of the day. The exact prices will only be revealed next month at the IFA, but we can expect the Samsung Galaxy Note 4 to cost at least $800 with prices only going up if you opt for a version with more internal storage. The LG G3 Stylus on the other hand only comes in one variant so the price will not be affected by this. But how much will it cost? It’s hard to say at this point, but LG claims that their device comes at an “exceptional price that can’t be beat.” It’s anybody’s guess what that could mean. We suspect that it will cost around $200 less given the low specs, which would put it at around $600 and that’s certainly a price that can’t be beat by any other similar device.

All in all, the Samsung Galaxy Note 4 definitely has a lot going for itself, but it’s hardly surprising as this is one of the most anticipated devices of the year. One the other hand, the LG G3 Stylus might not seem that impressive at first glace, but it does offer a pretty good camera and battery life so it’s a good alternative if you’re not necessarily tech savvy and don’t really need the extra performance. The cheap price certainly helps as well, but only if it’s around $600 like we assume it to be, anything higher than that is too much for what it offers. Bottom line? Well, we finally have a decent alternative to the Samsung Galaxy Note 4 and it’s one that trades in some of the LG G3’s performance in order to make it more affordable, which should appeal to a lot of consumers. However, the Note 4 is undoubtedly the better choice here and you should definitely consider a purchase if you can afford it as this will be an excellent device.

I’m Load The Game’s co-founder and community manager, and whenever I’m not answering questions on social media platforms, I spend my time digging up the latest news and rumors and writing them up. That’s not to say I’m all work and no fun, not at all. If my spare time allows it, I like to engage in some good old fashioned online carnage. If it’s an MMO with swords and lots of PvP, I’m most likely in it. Oh, and if you’re looking to pick a fight in Tekken or Mortal Kombat, I’ll be more than happy to assist! Connect with me by email markjudge (@) loadthegame.com only
@@MarkJudgeLTG
Previous Asus curved ZenWatch teased, to be unveiled at IFA Berlin
Next Quake Live is undergoing major changes in preparation for its Steam release