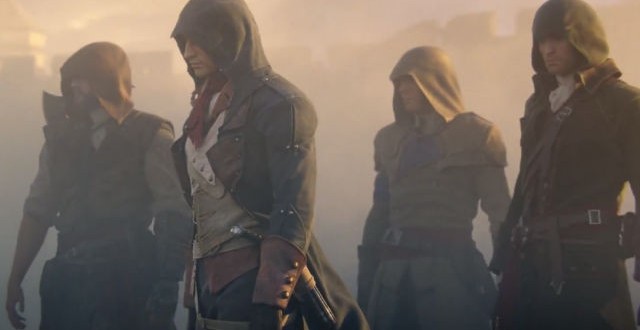 Publishers seem very confused as of late when they decide to announce a release date for their games. A lot of people (myself included) thought it was kinda weird that almost all major titles of the year will be launched in October. Well, no need to worry about that anymore because most games have now been delayed due to this very reason, although you’ll be hard pressed to find a publisher that admits it. The latest big hitter of 2014 to suffer a delay is Assassin’s Creed Unity, which only comes out on November 11th in North America as we recently learned from Ubisoft. Coincidentally, the last-gen exclusive Assassin’s Creed Rogue launches on the very same day.

It seems that working on a next-gen only title is harder than anticipated so Ubisoft needs a couple more weeks to sort things out. “This being a fully next-gen game, it requires a lot of work, a lot of production, and a lot of learning,” says Senior Producer Vincent Pontbriand. “It’s always hard to be precise and to quantify exactly how much work is involved. So as we get close to the finish we often realize we’re near the target but we’re not quite there yet.” The producer also went on a rant about how they “rebuilt most of the systems” for Assassin’s Creed Unity, but I’ll spare you all the details. Suffice it to say that two weeks is apparently enough time to make the necessary adjustments. A lot of games have been delayed until 2015 so two weeks isn’t that bad I suppose, but I think most people would have liked to get their hands on Assassin’s Creed Unity sooner rather than later.

I’m Load The Game’s co-founder and community manager, and whenever I’m not answering questions on social media platforms, I spend my time digging up the latest news and rumors and writing them up. That’s not to say I’m all work and no fun, not at all. If my spare time allows it, I like to engage in some good old fashioned online carnage. If it’s an MMO with swords and lots of PvP, I’m most likely in it. Oh, and if you’re looking to pick a fight in Tekken or Mortal Kombat, I’ll be more than happy to assist! Connect with me by email markjudge (@) loadthegame.com only
@@MarkJudgeLTG
Previous Microsoft announced the free Games with Gold for September
Next Saints Row 4 stand-alone expansion announced at PAX