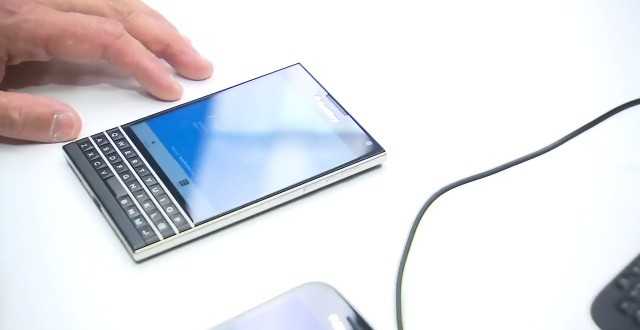 Leaks and rumors regarding the Blackberry Passport have been floating around for quite some time now, but soon we’ll be able to learn all about the handset from Blackberry itself. Today, the company started sending out invites for an event scheduled to take place on September 24th where the device will be officially announced. This event will presumably take place at the same time in Toronto, Canada, London, UK and Dubai, United Arab Emirates. The spec list for the upcoming smartphone was leaked last month so we know a fair amount of details about the Blackberry Passport already, but it’s always nice to hear all about it from an official source.

The QWERTY device is said to come equipped with a 4.5-inch LCD display with 1440 x 1440 pixel resolution and Gorilla Glass 3 protection. On the hardware side, we should find something along the lines of a Qualcomm Snapdragon 800 processor clocked at 2.2 GHz, 3GB of RAM and 32GB of internal storage memory with microSD card support. The Blackberry Passport is also rumored to feature a 13MP primary camera with optical image stabilization, 2MP secondary shooter, and an absolutely massive 3,450 mAh battery. Connectivity-wise, the Blackberry Passport will be able to support LTE, Wi-Fi 802.11ac, GPS, Bluetooth, HSPA+ and NFC.

As if all those details weren’t enough, we also know the device’s measurements. The Blackberry Passport will reportedly be 9.3 mm thick, measure 128 mm x 90.3 mm and weigh 194.4 grams. To be honest, there aren’t a whole lot of details left to be revealed, but perhaps Blackberry will also make some other announcements at the September 24th event so keep an eye out for that.

I’m Load The Game’s co-founder and community manager, and whenever I’m not answering questions on social media platforms, I spend my time digging up the latest news and rumors and writing them up. That’s not to say I’m all work and no fun, not at all. If my spare time allows it, I like to engage in some good old fashioned online carnage. If it’s an MMO with swords and lots of PvP, I’m most likely in it. Oh, and if you’re looking to pick a fight in Tekken or Mortal Kombat, I’ll be more than happy to assist! Connect with me by email markjudge (@) loadthegame.com only
@@MarkJudgeLTG
Previous Wildstar will soon get Megaservers, free realm transfers now available
Next iCloud security breach blamed on users instead of Apple