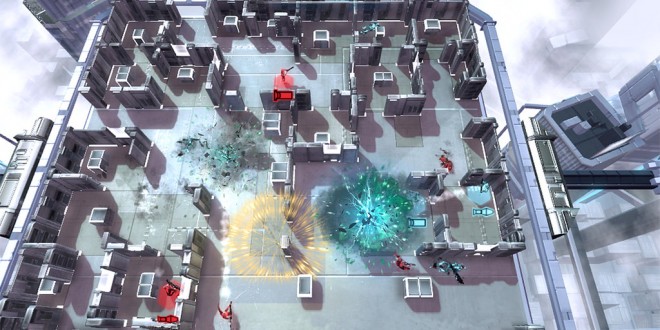 Frozen Synapse Prime (formerly knows as Frozen Synapse: Tactics) will launch on September 23 in the Americas, Asia and Europe for PlayStation Vita. The game is being ported to the PlayStation platform by British video-game developer Double Eleven, which specialises in this particular process, having ported to PlayStation Vita a number of games, including LittleBigPlanet, Limbo and PixelJunk Shooter. Frozen Synapse Prime is Mode 7’s asynchronous turn-based strategy game set in a dystopian cyberpunk future, where players take on the role of “Tactics”, coordinating “a small rebel faction to overthrow a powerful corporation controlling the city of Markov Geist”. The strike team will be composed of several types of soldiers: shotgunners, machine-gunners, snipers, grenadiers and it will play out on “destructible and customizable battlefields”.

The game will feature a rich single player campaign, loaded with over 40 missions. There will also be a asynchronous online multiplayer which will allow players to take on multiple adversaries from around the globe simultaneously (that sounds challenging). Frozen Synapse Prime will also feature several different game modes, including the classic deathmatch, VIP Protection, Hostage Rescue, Base Infiltration & Control and Item Collection. There will also be Global Leaderboards for showcasing gamer ranks and a Replay Theater that saves the games for a later review.

The original version of the game for Mac and PC, Frozen Synapse, was praised for its incredible soundtrack. The PS Vita version will also feature a soundtrack available for purchase separately through the PlayStation Store or with the game as part of the “Prime Soundtrack Edition” bundle.

Chief Operator and Marketeer at Double Eleven, Mark South, has concluded his PlayStation blog-post with a little tease, stating that “We have a few more updates planned in the coming weeks leading up to launch. We hope to show you basic combat and planning, more on online multiplayer, and some advanced tactics to get you well on your way”. Fore more information about Frozen Synapse Prime, check out their website over at double11.co.uk

Alessandro is a languages and literature student and gaming enthusiast. Long hair and a bushy beard, he spends most of his time on romantic dates with fascinating old tomes. In his free time, he follows and comments the gaming community while playing games. You can follow him on twitter to see what he's up to.
Previous Camelot Unchained delayed, Alpha set for next spring
Next Madden NFL 15 gets new trailer complete with the ‘Tiny Titan’ bug