John Vechey, PopCap’s co-founder, has left the company, according to a letter published on the Electronic Arts blog. On September 5, Frank Gibeau, Executive Vice President for EA Mobile has announced that “This morning, John Vechey announced that after a great run of 15 years, he has decided to leave PopCap”. You might know PopCap as the American video-game developer and publisher that made Bejeweled, Plants vs Zombies, Peggle and Solitaire Blitz . John Vechey was the only original co-founder left at PopCap. He replaced Dave Roberts as CEO of the company, after his retirement at the beginning of 2013. Fellow co-founder Jason Kapalka also left the company a week later, on January 8, 2013. The third co-founder, Brian Fiete, has left the company in 2010.

He stated in his letter to his fellow colleagues that his next plans are unknown even to him. But while he’s trying to figure out what the future will hold for him, he will be “spending some time working with environmental news non-profit Grist.org”, of which he is a board member. He also added that “I’ll be taking some non-violence workshops, furthering some of the things I’ve learned from being part of the Quaker community, while I explore peace and social justice issues, such as war abolition, prison reform, poverty and the effects of race and gender privilege”.

EA praised John Vechey as being “creative, talented, and always a lot of fun”. After John Vechey’s departure, the PopCap mobile studio will continue to be led by Steve Mauri, Cara Ely and Jon David. EA has also said that PopCap is already working on new projects and that they have “games in the pipeline, including an all-new Peggle, new concepts coming through rapid development at PopLabs, and global opportunities for PopCap brands like PvZ. PopCap continues to be a core studio in EA’s mobile efforts, and I know our players will be thrilled with what’s to come from this talented group.”

Alessandro is a languages and literature student and gaming enthusiast. Long hair and a bushy beard, he spends most of his time on romantic dates with fascinating old tomes. In his free time, he follows and comments the gaming community while playing games. You can follow him on twitter to see what he's up to.
Previous Run Like Hell! coming out for PS Vita this month
Next Hyrule Warriors initial plans revealed Is Plants vs. Zombies Garden Warfare 2 good? Impressions from the open beta 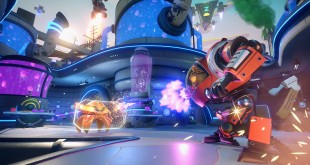 How to get into Plants vs. Zombies: Garden Warfare 2’s beta and what’s in it The next stage (or more accurately, the continuation of a stage) has just been released for ...