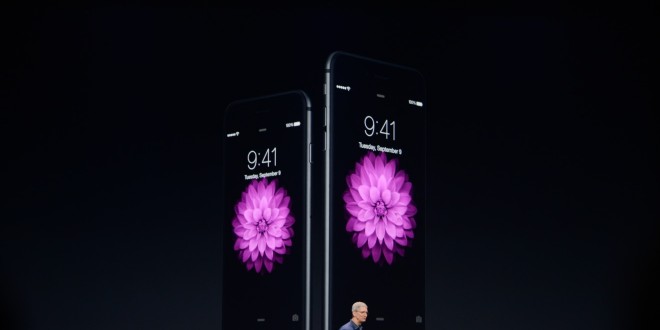 iPhone 6 and iPhone 6 plus revealed

The day has come! Apple is holding the unveiling event in Cupertino just now, and we’ve already gained access to all the juiciness going around in there. The iPhone 6 and iPhone 6 Plus (the phablet one) have been revealed, and most leaks confirmed. 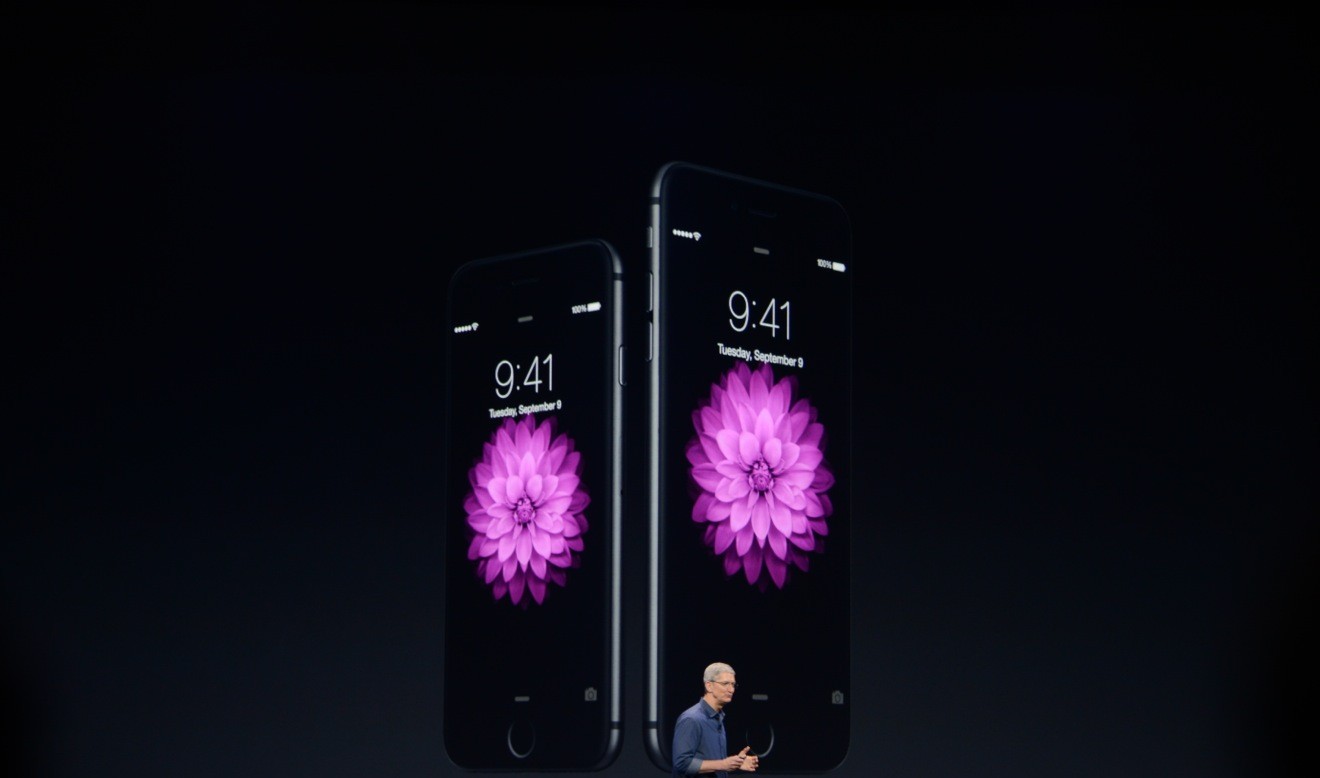 The iPhone 6 and iPhone 6 Plus look just like we thought they would. The iPhone 6 has a 4.7 inch  1334*750 resolution and 326ppi screen on a chassis with curved edges. No sapphire glass is present, but Tim Cook did say that the screen was ion-strengthened. What’s impressive about the iPhone 6 is that it only measure 6.7 mm in thickness, making it the thinnest iPhone Apple has ever made. 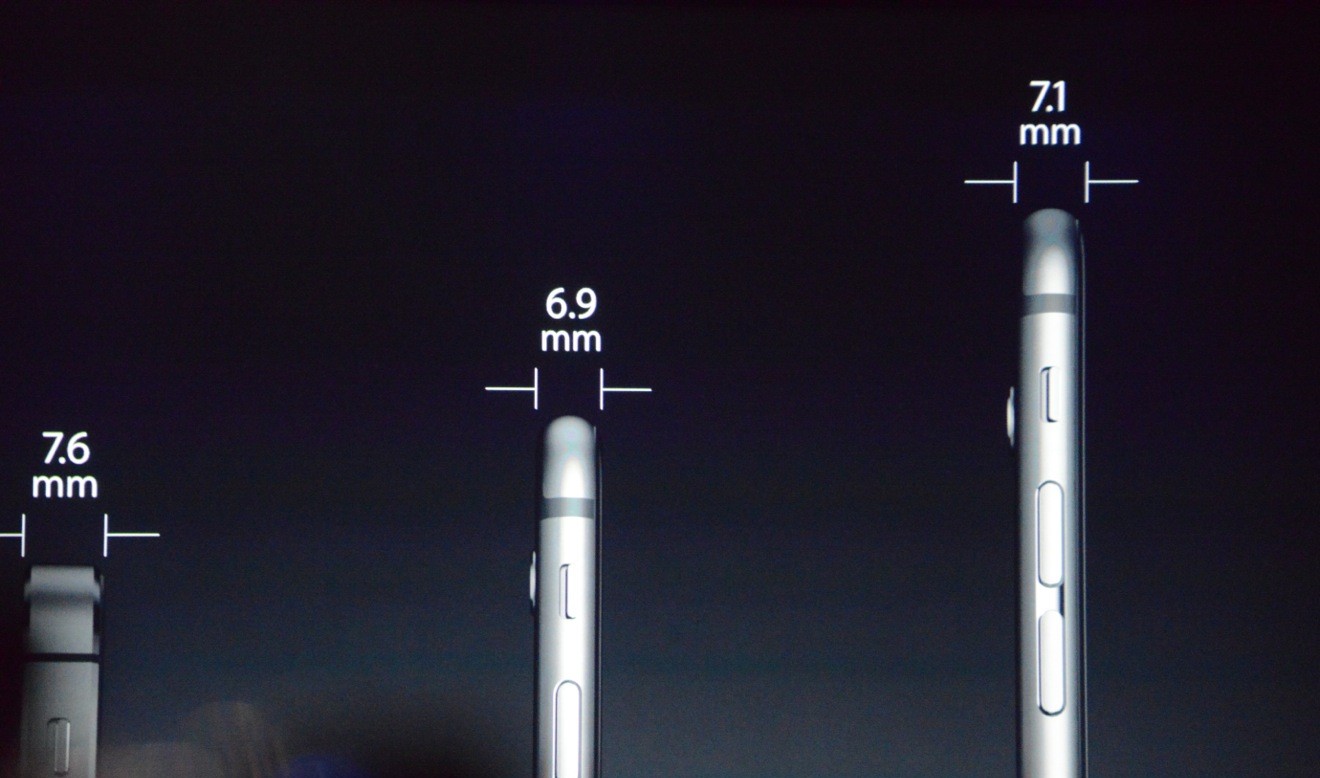 The iPhone 6 Plus differs from the iPhone 6 only in size and display resolution, the latter sporting a 5.5 inch Full HD 1080p resolution display dubbed Retina HD. It’s also 0.2 mm thicker than the iPhone 6, with 7.1 mm. Otherwise, the same aluminium build is present on both phones and no other differences were emphasized.

The power button on the iPhone 6 has been moved to the sideof the device, closer to the volume rockers. Since iPhone users have so far been comfortable with smaller displays, the button placement comes not only as a tweak for existing users but as a small pull-factor for newcomers. The iPhone 6 is powered by an A8 processor, supposedly 25% faster than the A7 CPU the iPhone 5S had. It will also allow a 50% increase in graphics speed.

Apple says, that with the new processor equipped, both the iPhone 6 and iPhone 6 plus will be 84 times faster than the original iPhone. Besides the A8 processor, Apple is implementing the M8 motion co-processor so that it can capture all the motion data the iPhone 6 sensors are feeding it, including its accelerometer, gyroscope and compass. The M8 processor can detect whether you are going up the stairs, climbing down, cycling, walking or running. The power Apple has built in the iPhone 6 is quite remarkable and might make devices like the HTC Desire 820, Lenovo Vibe Z2 or Alcatel One Touch Pop 2 fall behind its impressive performance. That remains to be seen, though. 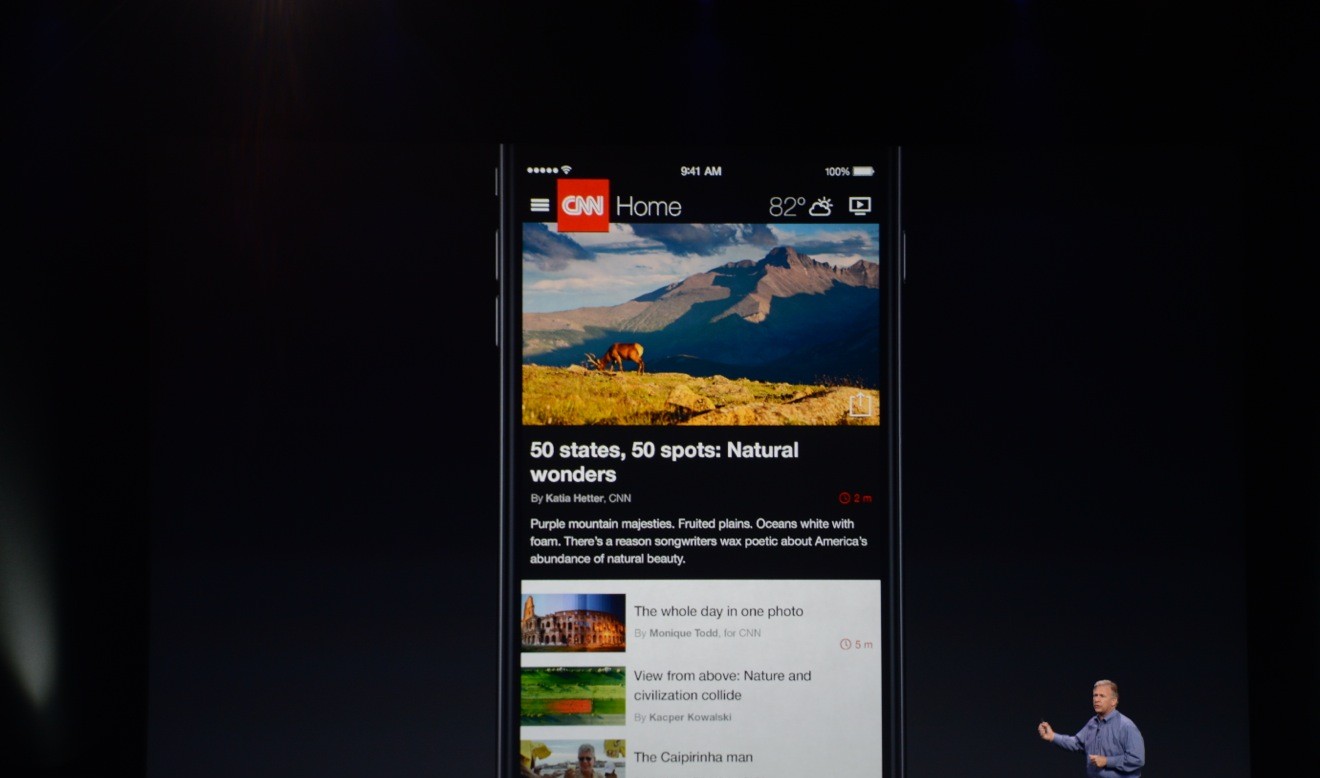 Both the iPhone 6 and iPhone 6 plus will be equipped with iOS 8, although the presentation of the operating system at the Apple event was short and rushed, so we didn’t get to see much of it. Otherwise, the new Apple gadgets don’t bring that much of an evolution, except for the processing power and the Metal platform and gaming engine Apple is pushing to develop new high-res games for iOS 8.

Touch ID is still featured on both iPhone 6 models, only they will actually work with the phones’ integrated NFC in order to be able to benefit from mobile payments. So rumors were true, a mobile payment platform is actually going to be introduced by Apple. LTE advanced is supported by the iPhone 6, with speeds up to 150Mbps, covering more than 20 LTE bands. VoLTE and carrier aggregation are also supported. The Wi-Fi in the iPhone 6  supports 802.11ac networks, alongside Wi-Fi calling on T-Mobile in the US and EE in the UK. 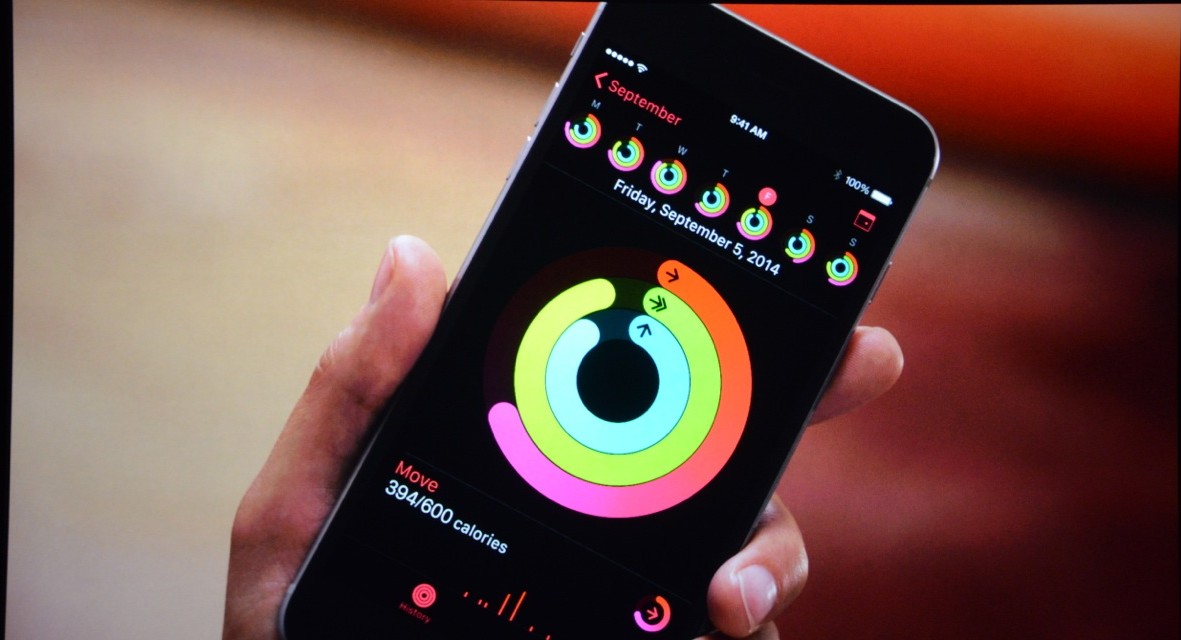 As for the camera, we were left unimpressed. 8 MP rear camera with a new autofocus system that uses pixels on the image sensor to focus faster. Apple says that the camera will end up being twice as fast as on the iPhone 5s. Face detection, blink detection, smile detection, detail improving processing algorythms (contrast, brightness, sharpness), panorama and HDR are the features available for the camera. Supposedly, panorama pictures will go up to 43 MP in size. Video capabilities of the iPhone 6 include shooting 1080p video at either 30 or 60 frames per second, and the slow motion feature now supports 120 or 240 frames per second.

The iPhone 6 will come in three colors, gold, silver, and space grey, for $199 for a 16GB model, while 64GB and 128GB versions will be available for $299 and $399, respectively. The iPhone 6 Plus costs $299 for a 16 GB model, $399 for a 64 GB model, and $499 for the 128 GB model, the largest storage on an iPhone. Pre-orders begin on September 12 and shipments start September 19. Five new color cases for the iPhone 6 Plus will be available, including a red one for (Product) Red, the AIDS awareness charitable endeavor Apple is supporting. 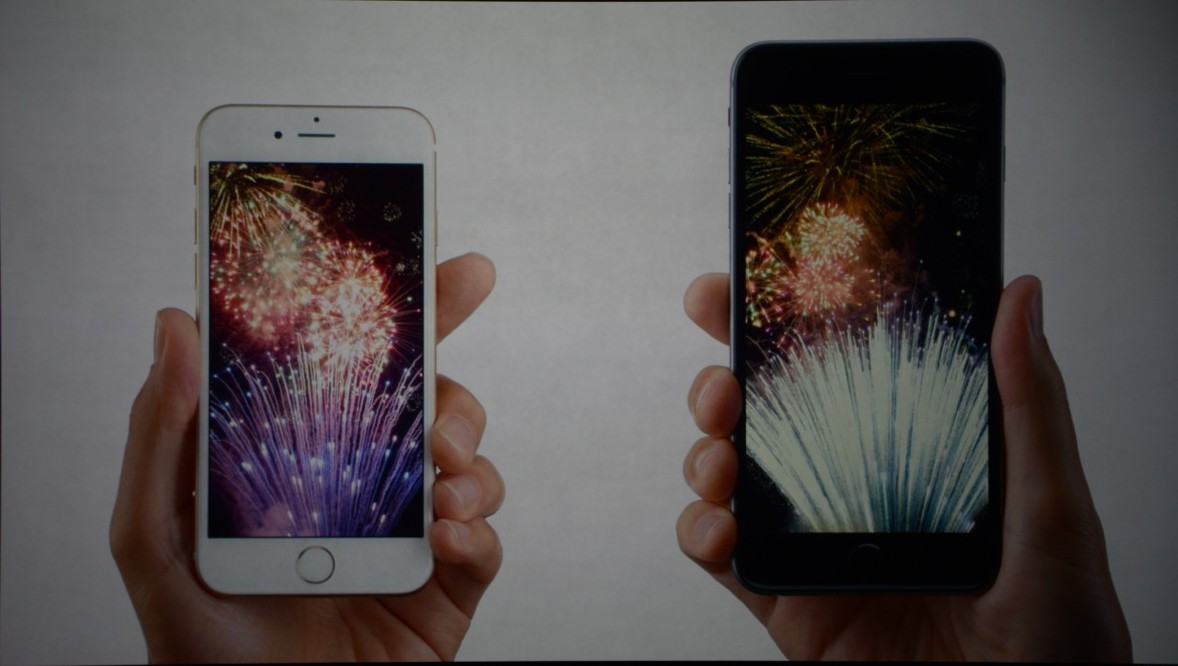 So, that’s about all the information Apple has given us on the iPhone 6. What do you think? Are you impressed or are you disappointed? What do you think about the price of the devices? Would you upgrade (or downgrade) to the iPhone 6 or iPhone 6 Plus now that you know what it’s all about? I sure wouldn’t. I was left unimpressed by the two phones, not because they weren’t top-notch devices, but because of IFA.

It’s true. I’ve said this before, but the iPhone 6 has had its spotlight stolen by all the juiciness at IFA Berlin. I was much more in awe viewing the IFA Berlin events than viewing the iPhone 6 unveiling. Do you feel the same? I would rather get the Galaxy Note 4, Galaxy Note Edge, HTC Desire 820, Galaxy Alpha or better yet, the Meizu MX4 or MX4 Pro. I think that would be a better deal than the iPhone 6. But that’s just my two cents. What’s yours?

I did say the iPhone 6 unveiling was overshadowed by IFA Berlin, but note that I didn’t say the whole event was disappointing. Stay tuned, because Apple had something up their sleeve this time!

My life-long dream has been to test out every gadget on the market! Considering the fact that I've rapidly destroyed almost every gadget I've had so far, I'm not inclined to owning something, so my ideal outcome would be to have a different gadget each month. I'm really into smartphones, wearables and tablets and I love Playstation and Xbox, I'm sure I'll beat you at your own game (after a month of training... or two)
Previous Alien: Isolation goes gold and receives new trailer
Next Apple Watch turns out to be the iWatch