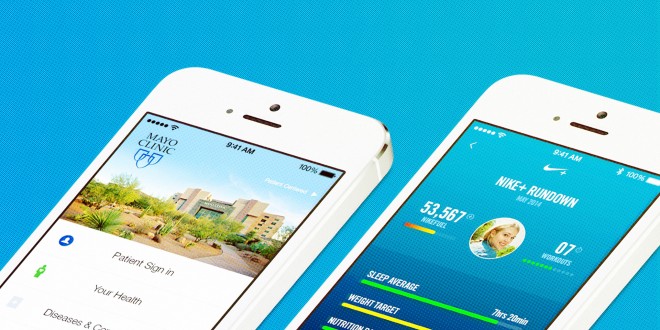 A major feature of the Apple iOS 8 will be the HealthKit platform and application. The iPhone 6 and Apple Watch have just been launched and all of the devices in the new line of products from Apple will have HealthKit pre-loaded on iOS8.

HealthKit is an application on your iPhone or Apple Watch which collects all the health metrics the sensors on the devices pick up and stores them in the app. You can view stats and progress, health state, fitness stats, heart rate, blood sugar and cholesterol levels and calories burned. HealthKit aims to connect all the fitness and health apps you use so that it can offer a comprehensive overview of your health and fitness. It also allows for the creation of emergency cards – or glances, which show all the crucial information about your body and organism right on your lock screen in case you need emergency access to blood type and allergies, for example.

HealthKit offers advanced integration with other health oriented and nutrition apps so that the data collected by each of them can be shared with the others in order to offer you a comprehensive experience when working out or when monitoring your health state. Apple says that you will be the one to choose which apps can access what kind of data and how they use it. Apple’s example of this process is the information shared by a nutrition app with a fitness app can help the two work together in order to provide you with accurate exercising tips and nutritional information, so you don’t burn more calories than you should.

HealthKit sounds like an optimized platform for advanced health metrics monitoring, but it will also act as a bridge between you and your doctor, according to reports. Apple has been talking about a partnership between the company and various companies like Mount Sinai, the Cleveland Clinic, Johns Hopkins and medical records providers Allscripts and Epic Systems. Mayo Clinic has been on-board HealthKit since its announcement in June 2014.

Apple aims at an easier way to collect, store and share health data with the people that are qualified to see it. As such, the HealthKit app will soon offer integration with your medical records at certain health care providers and can communicate with your doctors in order to asses whether you are in need of treatment or a doctor’s visit. Rumors have it that the company will also be working with health insurance companies and the FDA in the future, so that customers can feel protected when sharing sensitive data like medical records.

The responsibility that might fall on Apple when it comes to storing sensitive data has supposedly been by-passed by the company, reports saying that third-party applications will be the ones responsible if any of the users’ data is compromised or hacked. That means that all the information an app stores and shares with HealthKit falls under the protection of the app. That might not be a beneficial partnership for respective third-party actors, because Apple has unveiled that HealthKit information will be stored on iCloud.

With the recent breach at iCloud, Apple should be feeling insecure about the cloud service’s privacy and security, but the company still declared that iCloud will be suitable for health data storage, because all the information that will be store there will be encrypted and wont’ be accessible without the users’ permission. The HealthKit platform has been launched Tuesday at the Apple event, but there surely will be improvements to the platform and since talks with health providers are still underway, there will certainly be modifications and new features in the app.

The problem with HealthKit and the whole idea of health monitoring and analyzing done by an electronic device and some third-party apps is that it can’t always be accurate. Since users will put complete confidence in the information HealthKit is providing, a generation of hypochondriacs may be in the making. With all the metrics and readings HealthKit can display people will surely start interpreting their own symptoms and recognize them as medical conditions, even though they don’t have the foggiest about what medical training means. Misinterpretation of health metrics by people who are not trained and have not been educated to recognize errors and truths will become a daily occurrence and instead of helping people stay fit and healthy, it might end up creating a health-hysteria.

Hypochondriacs are present in our society in growing numbers, mostly as a consequence of the internet, actually. People research their symptoms on the internet and attribute them to conditions they know nothing about, go to expensive clinics because their doctors said they were perfectly healthy and feeding money into the healthcare system. That might not be such a bad thing, but it does lead to unnecessary concerns and anxieties. With HealthKit and other health monitoring apps and platforms, people will surely feel as if they actually know something about human anatomy and our organism and will easily misinterpret the information these apps offer.

If HealthKit does end up recommending doctor’s visits and specialized consultations based on the health metrics Apple devices gather from their uses, Apple has to think of a way to avoid mass hypochondria and needs to let people know that recorded health metrics can always contain errors, no matter how advanced the technology is. If people panic that their heart rate reading has been up for a couple of days or their nutrition app shows that they haven’t been burning any calories for the past months, they might employ drastic measures to get their readings back to normal, before thinking about how technology works – faulty.

The HealthKit platform is a new development, so we shouldn’t rush to conclusions, but we do have to consider the possibility of inaccurate readings or exaggerated metrics. We should also stop and think whether cloud storage is the best way to store medical records and sensitive health related data.

What do you think about the integrated HealthKit platform? Will it have the adverse effects described above or will it simply act as a monitoring application? Should Apple allow cloud storage of sensitive medical data or should they find another way of giving access to medical records? Should they even be involved with such sensitive information of the users?

My life-long dream has been to test out every gadget on the market! Considering the fact that I've rapidly destroyed almost every gadget I've had so far, I'm not inclined to owning something, so my ideal outcome would be to have a different gadget each month. I'm really into smartphones, wearables and tablets and I love Playstation and Xbox, I'm sure I'll beat you at your own game (after a month of training... or two)
Previous Forza Horizon 2 on the 360 gets first details & screenshot
Next Battlefield 4’s Final Stand DLC revealed; includes new maps and a hover-tank