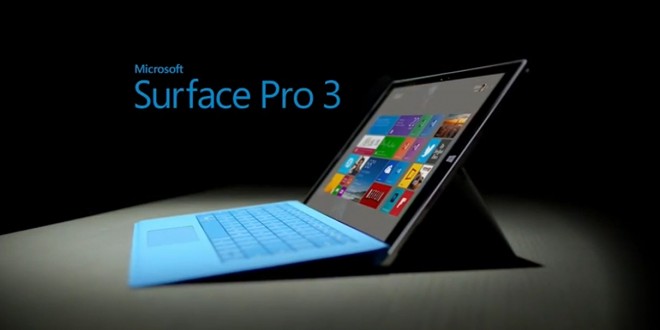 The Microsoft Surface Pro 3 tablet has been well received by many thanks to its thin and light design rivaling that of the iPad Air, but users encountered problems with the device soon enough, reporting serious overheating issues and WiFi inconsistencies.

Microsoft has heard the cry of Surface Pro 3 fans and has announced an update to be released soon. That was a few weeks ago and we almost lost all hope for the Surface Pro 3 when we saw that alas, Microsoft did finally issue that update. Microsoft is rolling out a firmware update this month which will encompass five important Surface Pro 3 updates.

The new update is said to improve performance issues, connectivity issues and overall stability of the Surface Pro 3. First off,  UEFI update v3.10.250.0 is to improve overall system stability, including Wi-Fi. Next, the Surface Pro Embedded Controller Firmware update v38.6.50.0 will deliver enhanced support for system performance and user experience, including a much needed thermostat icon on boot. Third comes the Surface Pro System Aggregator Firmware update v3.9.350.0 which will increas the overall system reliability and compatibility with a Surface cover. Fourth, Surface Integration driver update v2.0.1102.0 is set to  enhance user experience, including Wi-Fi stability. Last, but not least, the fifth update is the Surface Wi-Fi and Bluetooth driver update v15.68.3055.107 which will improve Wi-Fi/ Bluetooth reliability and system stability, and significantly enhances the user experience.

To download the update, swipe in from the right edge of the screen and tap Settings. Then tap Change PC Settings and choose Update and recovery, and tap Check now. Once the update shows, tap View details, select the update (listed as System Firmware Update – 9/9/2014) and tap install. Naturally, a restart will be required.

If my ranting has made you interested in this wonderful tablet, you can get the Surface Pro 3 in different variants:  in 64, 128, 256, 512GB configurations and i3, i5 and i7 processor variants and with 4GB of RAM in the 64 and 128GB storage configurations and 8GB of RAM in the 256 and 512GB storage configurations. The Surface Pro 3 includes Bluetooth, USB 3.0 port, dedicated power charger, ccoupling connector to attach an optional Type Cover/Keyboard combo, MiniDisplay port, microSD slot and 3.5 mm audio jack. What is missing when it comes to the tablet’s connectivity, is 4G. It makes up for that with the Surface Pen stylus it comes with, though. It also has 2 5 MP cameras on the front and the rear, making it the best in camera option.

My life-long dream has been to test out every gadget on the market! Considering the fact that I've rapidly destroyed almost every gadget I've had so far, I'm not inclined to owning something, so my ideal outcome would be to have a different gadget each month. I'm really into smartphones, wearables and tablets and I love Playstation and Xbox, I'm sure I'll beat you at your own game (after a month of training... or two)
Previous Dell Venue 8 7000: thinnest ever tablet
Next Nintendo will release three special designs for 3DS XL