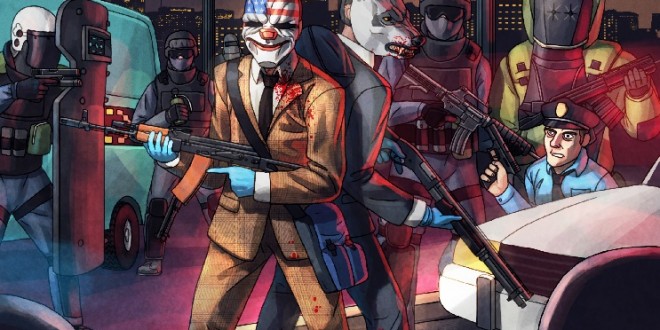 Developer Overkill announced that they teamned up with Dennaton Games, creator of Hotline Miami to create a DLC for Payday 2. The DLC will combine elements from both games. All that was confirmed about it is that it will be released on September 30 and that it will contain a heist. Any other information, according to Overkill, will be revealed at the end of the month.

So far, apart from the little information given by the developer, there isn’t much to add about this DLC. Overkill also released a live action teaser that shows some guys wearing animal mask beat up another guy that’s presumably tied to a chair. The viewers see the action in this trailer through the prisoner’s eyes. Watch it below and leave your thoughts in the comments:

For those who don’t know, Hotline Miami is a 2D top-down action game, developed by Dennaton Games and released on October 23, 2012 for Windows PC’s. The developer also released a Mac version in March 19, 2013 and collaborated with Abstraction Games to port Hotline Miami to PS3 and PS Vita. The port was released on June 24, 2013. On August 19, 2014, the game was also released on Playstation 4, where it can also be acquired through cross-buy.

Hotline Miami’s story is divided in seven chapters. At the beginning of each chapter, the protagonist wakes up in his apartment and listens to messages on his answering machine, telling him to perform certain tasks. And by certain tasks the message means killing all the people at a given location. Players have to choose an animal mask to wear, each providing advantages and disadvantages. Players have to naivigate through buildings and kill all the opponents. Sometimes there are bosses at the end of the chapter that you have to fight. There are several hidden masks that can be collected along the way. You can choose to go through the levels in stealth mode or in full action. The AI occasionally changes positions, moving to unpredictable locations. However, the game makes up for this through allowing players to restart each level at the moment they die.

The fact that these two games are linked through the upcoming DLC is very promising. Comparing these two games leads me to believe that the new content will contain more killing and violence than before and that, most likely, both Payday and Hotline Miami fans will love it.

I'm a journalism graduate and an occasional gamer. As a kid I used to own a NES clone called "Terminator 2", which was hugely popular in my country. I like old school games and adventure games but I occasionaly play RPG's and Shooters as well, though I wouldn't call myself an expert at these kinds of games. When I'm not writing or playing games I prefer reading detective or fantasy novels.
Previous Windows phone front-panel shows up
Next Windows 9 screenshots surface

Starbreeze announced a partnership with Lionsgate and Thunder Road to include John Wick, the titular ...