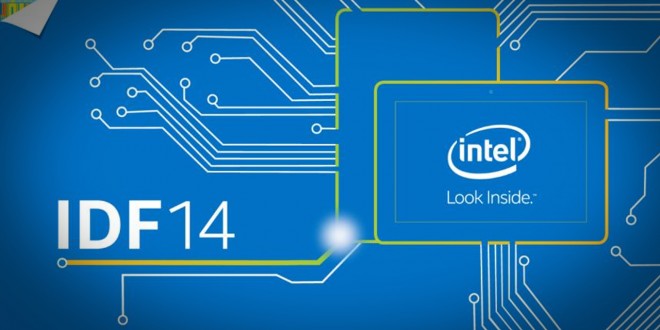 The Intel Developer Forum 2014 is a trade show for Intel products and products that were created based on Intel hardware. This year’s Intel Developer Forum was held between September 9 and 11 and had exhibitors from all around the world showing off their gadgets. This year’s forum focused more on wearable devices and wireless technology, with a notable smartphone absence.

The Intel forum’s biggest theme was wearable technology, like the MICA smart bracelet, developed by Intel and Opening Ceremony, which caters to those who don’t want a smartwatch but still would like to benefit of the technology in the form of jewelry. MICA has a 1.6 inch curved sapphire touchscreen on the inside of your wrist. The gadget will also pack its own 3G cellular radio, so it doesn’t need to be paired with a smartphone each time you use it, which is a pretty sought after feature in wearable tech. It also features wireless and USB charging and will be sold at Barney’s for the not-so-modest sum of around $1000.

The BioSmart in-ear headphones are being developed by SMS Audio using Intel technology and offer an implemented hear rate monitor, without having to be charged. The earbuds use the power channeled by the gold-plated audio jack they come with. They’re also waterproof, IPX4 rated, and will come with a tangle-free cord with an in-line microphone, neoprene carrying case, and three sizes of ear gels and hooks. You will be able to sync Intel’s headphones with Runkeeper and further app support is being developed at the moment. We don’t know for sure when teh headphones will be launched, but Intel said sometime this Fall.

The Alliance for Wireless Power (A4WP) showed off a technology which allows for the creation of various objects that can charge your devices just by touching them. A4WP is able to provide power through much thicker platforms, and can charge multiple devices on varying voltages at the same time. A4WP uses a transfer technology called Rezence, based on magnetic resonance geared to enable multiple-device charging, better charging range through layers, larger distances and operation in the presence of other metallic objects. Intel showed off a bowl that uses this technology, and it looks just like any other bowl you would see at Ikea, only that it can charge any device that fits in it.

Intel also announced  its next generation of microprocessors dubbed Skylake, which begin shipping in late 2015. Intel also announced that new CPUs built with 14-nanometer assemblies were on their way, as well as Core M and Core M vPRO chips. The latter are aleady shipping, according to Intel and will allow for fanless configurations on tablets and notebooks. The 5th generation i3, 15 and 17 chips are also in production and will begin shipping next year.

Dell’s Dell Venue 8 7000 was also a big highlight of the Intel Developer Forum, being the thinnest tablet in the world and the first to implement Intel’s own RealSense 3D camera technology. Dell Venue 8 7000 sports a beautiful 8.4 inch OLED screen with 2560*1600 resolution, “Moorefield” Atom Z3500 quad-core processor and the Intel RealSense 3D camera that includes depth-sensing technology. With the thickness of the Dell Venue 8, the build doesn’t allow for much in terms of ports and things, so an SD card slot is not going to be available and charging will be done with a USB port.

The Intel Developer Forum was a diverse event with many new products introduced by small and big companies benefiting from Intel technology. Intel tries focusing more on wearables, tablets and PCs at the time, because the company has realized that the smartphone market has become quite saturated and they don’t see a profit from entering it only to rival Qualcomm.

My life-long dream has been to test out every gadget on the market! Considering the fact that I've rapidly destroyed almost every gadget I've had so far, I'm not inclined to owning something, so my ideal outcome would be to have a different gadget each month. I'm really into smartphones, wearables and tablets and I love Playstation and Xbox, I'm sure I'll beat you at your own game (after a month of training... or two)
Previous LG G Flex 2 to sport smaller display, higher resolution
Next MacBook Air with Retina and Core M chip launching mid-2015

Intel was a big presence at CES 2015 this year, launching the new line of ...