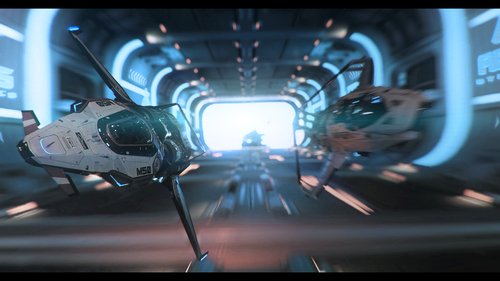 Chris Roberts announced earlier today the releases of Arena Commander v 0.9. This is the biggest update to the latest module introduced to Star Citizen and it includes plenty of bug fixes and balancing as well as some new game modes. Among the new game modes we can find Racing and Vaduul Swarm Co-op. The first one is a Star Citizen simulation of the famous Murray Cup race and comes complete with a new map called New Horizon. Meanwhile, the Co-op version of Vaduul Swarm allows you to team up with three of your friends so that you need not face the challenge alone.

The way you do this is via the friend code system, which was also introduced with Arena Commander v 0.9. To top it all off, Star Citizen now has leaderboards as well and they will show you how’s the best possible pilot around. Aside from new game modes and game modes related features, update v 0.9 adds a couple of new racing ships called M50 and 350R. Also, players now have access to several new hangars and they can select which of them they want the game to load in from their account or the official website. Moreover, Chris Roberts and Cloud Imperium Games have also worked on a few game improvements for Star Citizen. These include:

Star Citizen recently managed to reach the $53 million milestone thanks to all the backers who have contributed to this ambitious project. Needless to say, this is still the most successful crowdfunded game of all time and that probably wont change any time soon.

I’m Load The Game’s co-founder and community manager, and whenever I’m not answering questions on social media platforms, I spend my time digging up the latest news and rumors and writing them up. That’s not to say I’m all work and no fun, not at all. If my spare time allows it, I like to engage in some good old fashioned online carnage. If it’s an MMO with swords and lots of PvP, I’m most likely in it. Oh, and if you’re looking to pick a fight in Tekken or Mortal Kombat, I’ll be more than happy to assist! Connect with me by email markjudge (@) loadthegame.com only
@@MarkJudgeLTG
Previous Larian Studios talk about their post-Divinity plans
Next Samsung Galaxy Alpha is now available for purchase in certain markets