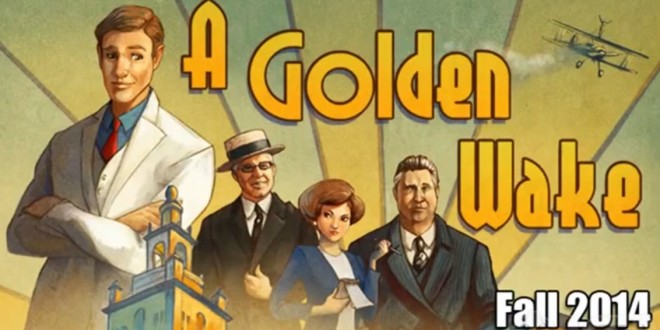 “A Golden Wake” is a point and click indie adventure game, developed by Francisco Gonzales (known for the Ben Jordan series) and published by Wadjet Eye Games. The game is set in the 1920’s, in the state of Miami. It will be released on the 9th of October for Windows, MAC and Linux. During the game, players assume the role of Alfie Banks, who wants to reach the top of the 1920’s real estate game. “A Golden Wake” also explores the events around the beginnings of the Coral Gables community.

Francisco Gonzales, the developer of “A Golden Wake”, spoke about his upcoming game in an interview given to indiegames. He stated that he had planned to make a commercial game ever since he was working on the last “Ben Jordan” game. He compares freeware development to making commercial games by stating that the standards have to be raised, as people have expectations from something they pay for. He adds that working on a commercial release comes with the pressure to finish the game until a certain deadline.

Speaking about “A Golden Wake”, Francisco Gonzales says that this game is unique through its setting, that is not commonly used in adventure games. In addition, the game’s protagonist is atypical, because he is not out to save the world or get the girl. Instead, this is a story about a man who tries to make a name for himself and gives in to temptation, ending up being corrupted by the crime world.

The developer explains his choice of setting and characters through the fact that he wanted to make a game that showcased part of Miami’s history: “I began doing research in around 2009, and once I saw just how interesting the 1920s Land Boom was, I figured a great story for a game could come from that. I had the idea in my head for a couple of years, then finally sat down and wrote it out. It took a few tweaks, but in then end I settled on a story that I was pleased with.” Many of the characters are real people that lived in the area at the time. The developer states that it was a challenge to represent them in a faithful way while allowing them to fit into the story.

“A Golden Wake” comes out on October 9 for Windows, Mac and Linux and can be pre-ordered from the Wadjet Eye’s website for $14.99. If you pre-order the game you receive its soundtrack for free.

I'm a journalism graduate and an occasional gamer. As a kid I used to own a NES clone called "Terminator 2", which was hugely popular in my country. I like old school games and adventure games but I occasionaly play RPG's and Shooters as well, though I wouldn't call myself an expert at these kinds of games. When I'm not writing or playing games I prefer reading detective or fantasy novels.
Previous Destiny takes the crown as the most successful new IP launch in the UK
Next Nexus 5 vs Lumia 1020 – Is it just the camera?

A Golden Wake gets a demo