Breaking News
Home » NEWS » From gaming console to notebook: The XBOOK ONE is here to stay 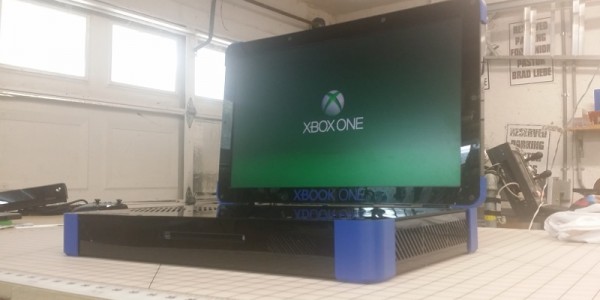 From gaming console to notebook: The XBOOK ONE is here to stay

This brilliant idea comes from a talented hardware modder, Edward Zarick, who is no stranger to building custom Xbox console-based notebooks, baptizing them “XBOOKS.” Having his hands full in the past customizing Xbox 360 consoles, he found himself on the spot with the appearance of the new Xbox One and knew he had to turn his attention to this new generation of consoles. So, without wasting any time he created the XBOOK ONE as he likes to call it. An unusual and original blend between console and laptop. Here is what he had to say about his XBOOK ONE:

“It was only a matter of time until I got around to making a XBOOK ONE! For those of you not familiar with my previous work on Xbox laptops, I call them “XBOOKS.” I made quite a few of the XBOOK 360s over the last couple of years, probably around 30 of them. But the Xbox 360 is old news… out with the old, in with the new! So, I now announce the XBOOK ONE! One of the first Xbox One laptops. Hope you like it as much as I do!” For those generous tech enthusiasts, the price for the old XBOOK 360 was around 1000 $, while the new XBOOK ONE should be setting you back a little over 1000 $ with a private owned Xbox One. For those who do not possess an Xbox One, the price should be around 1500 $ (including shipping and handling).

Those who are willing to buy this concept notebook will be charged 750 $ in advance, and Zarick says it takes between 2 to 3 weeks to complete. He also states that any intentional interference with the hardware of the console voids its warranty, and that no modifications were made to the stock version of the Xbox One. The XBOOK ONE specs include (beside the console itself) a 22 Inch Vizio LED 1080 p monitor, slot-loading, front-facing disc drive, and 3-D printed components. The XBOOK ONE provides full Kinect support, and the owner will be able to choose his preferred color of the accents, corners, or acrylic. You can see a detailed description of the exquisite XBOOK ONE in the video below:

I'm Razvan, a sports and first-person shooter enthusiast. I've always loved writing, even more so when it involves games. When I'm not playing on my PS3 or writing, I like to run exhausting cardio workouts, play soccer, watch a good movie, or read a good book.
Previous HTC Nexus 9 will release early next month according to a source close to the matter
Next Microsoft Studio in charge of Gears of War development

Nvidia Shield: not a tablet, but a cloud-powered console

SteamBoy lets you play Steam games on the go

SteamBoy is an upcoming handheld gaming console that lets you play most of the games available ...