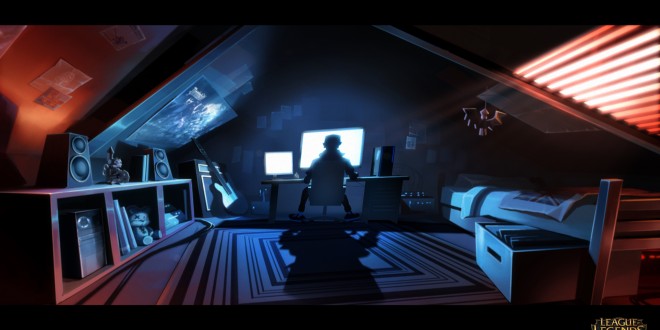 The League of Legends World Championships 2014 have begun and fans everywhere are eagerly waiting for the semifinals and grand final, which will be held on October 19th in Seoul, South Korea. But before that, 16 teams will be competing against each other in the group stages and you can watch all the matches here. In order to celebrate this special occasion, Riot released an epic animated trailer called “Warriors”. Well, perhaps trailer is not the right word here as it’s more like a music video and the song is composed by none other than Imagine Dragons. The band members have previously confessed their love for League of Legends and they were contacted by Riot for this collaboration.

The video is very different from usual League of Legends trailers as it’s more focused on the players and their struggles rather than the game itself. It’s a bit hard to relate for the people who only watch e-Sports tournaments from home, but there’s a lot of pressure for those participating in such an important competition and the video does a great job at showcasing this. “The battle begins, and sixteen teams across the globe are fighting towards one goal – to win the League of Legends World Championship,” Riot says. “To kick off the start of the action, we set out to craft a war cry to rally behind in a creative collaboration with Imagine Dragons. Whether you’re a solo queue warrior or fighting off the LCS jitters – every moment counts.”

The matches in groups A and B started earlier today and will end on September 21st. Then, between September 26th and September 28th the team from groups C and D will be competing against each other. As mentioned, the League of Legends World Championships 2014 will culminate with the grand final on October 19th where the best team in the world will get to take home over $2 million. In the meantime, check out the music video by Imagine Dragons below.

I’m Load The Game’s co-founder and community manager, and whenever I’m not answering questions on social media platforms, I spend my time digging up the latest news and rumors and writing them up. That’s not to say I’m all work and no fun, not at all. If my spare time allows it, I like to engage in some good old fashioned online carnage. If it’s an MMO with swords and lots of PvP, I’m most likely in it. Oh, and if you’re looking to pick a fight in Tekken or Mortal Kombat, I’ll be more than happy to assist! Connect with me by email markjudge (@) loadthegame.com only
@@MarkJudgeLTG
Previous Need for Speed Rivals Complete Edition out next month
Next 20 new minutes of Metal Gear Solid V reveal its jungle