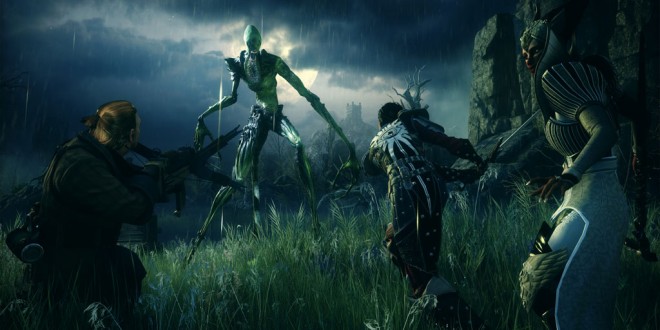 Introducing players to a great ally/enemy artificial intelligence is usually hard to pull off. Said companions might get you killed, while your opponents might be a “walk in the park”, simply because the A.I. is… well, stupid. According to BioWare Producer Cameron Lee, however, upcoming Dragon Age: Inquisition gamers have nothing to fear, as he describes Inquisition’s A.I. to be “pretty intelligent”.

“I don’t know [if] you [will] have to micro-manage people in Inquisition; you can if you want to, but the AI is pretty intelligent”, says Lee. “For example, if you have Cassandra in your party – she’s a warrior – and if you’ve built her to be kind of like a tank warrior, an offensive warrior, she’s going to try and draw aggro across everyone; all the enemies around her. In particular, [she will] try and draw the agrro from enemies you’ve got targeted, as well. So, they’ll be quite intelligent in how they react. And – of course – from there you can customize how those companions behave and what sort of abilities they use more often than others, and how they use their own resources in terms of health, stamina, mana, and stuff like that, as well.”

Dragon Age: Inquisition is set in the continent of Thedas, the fantasy world in which the two previous games are set. The game covers more geographic territory than its predecessors, with one map being described as four to five times the size of Ferelden, the setting of the first game in the series. The developers said that the next game would likely be somewhere more “French”, which fans recognize as the land of Orlais.Following the events described in the supplementary novels Dragon Age: Asunder and The Masked Empire, a civil war between the loyalists of the ruling Empress and a powerful noble faction led by her cousin – Grand Duke Gaspard – broke out in Orlais. Simultaneously, the Circle of Magi has gone rogue, in part due to the events of Dragon Age II, and the Templar Order seceded from the Chantry to wage their own civil war on the mages.

Dragon Age: Inquisition launches on November 18th in North America and November 21st in Europe, on the PlayStation 4, Xbox One, PlayStation 3, Xbox 360, and PC.

I’m Load The Game’s co-founder and community manager, and whenever I’m not answering questions on social media platforms, I spend my time digging up the latest news and rumors and writing them up. That’s not to say I’m all work and no fun, not at all. If my spare time allows it, I like to engage in some good old fashioned online carnage. If it’s an MMO with swords and lots of PvP, I’m most likely in it. Oh, and if you’re looking to pick a fight in Tekken or Mortal Kombat, I’ll be more than happy to assist! Connect with me by email markjudge (@) loadthegame.com only
@@MarkJudgeLTG
Previous EA’s latest trailer combines Battlefield with Need for Speed
Next New Sherlock Holmes: Crimes and Punishments teaser released