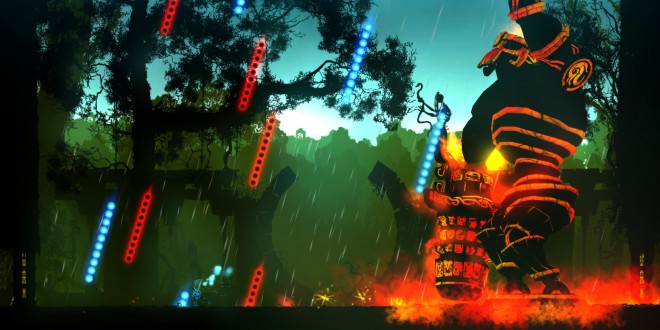 To celebrate the imminent release of the PC version of Outland (September 29th; exclusively on Steam), publisher Ubisoft and developer Housemarque have released a new trailer (seen below) for the upcoming 2D action/adventure platformer. “Outland is a fast-paced, dynamic platformer where the player uses powers of light and dark in an epic journey to save the world from forces of chaos”, reads the game’s official description. “In-between Balance and Chaos stands one man, whose efforts will either bridge the ancient divide or doom the world to destruction. Outland is an ambitious 2D-platformer with a beautiful visual style and a unique, polarity-switching gameplay system. Your adventure will shift between light and darkness as you struggle to adapt in an ever-changing world!”

You can also check out the game’s official minimum and recommended system requirements below.

In addition to the main storyline, Outland also features an Arcade Mode that puts players to the test by putting a set time for gamers to traverse throughout an entire region and defeat its protector. Flipping a switch, pausing the game, and dying halt the timer. Arcade scores increase with multipliers that drop from enemies, and a bonus is given depending on how much time is left after the protector is defeated. An Arcade chapter for one area is unlocked as soon as the area itself is unlocked. Outland is also available on the PlayStation 3 (via PSN) and Xbox 360 (via XBLA).

I’m Load The Game’s co-founder and community manager, and whenever I’m not answering questions on social media platforms, I spend my time digging up the latest news and rumors and writing them up. That’s not to say I’m all work and no fun, not at all. If my spare time allows it, I like to engage in some good old fashioned online carnage. If it’s an MMO with swords and lots of PvP, I’m most likely in it. Oh, and if you’re looking to pick a fight in Tekken or Mortal Kombat, I’ll be more than happy to assist! Connect with me by email markjudge (@) loadthegame.com only
@@MarkJudgeLTG
Previous 2 new Driveclub PS4 bundles announced
Next iPad Air vs. Asus Transformer Book T100