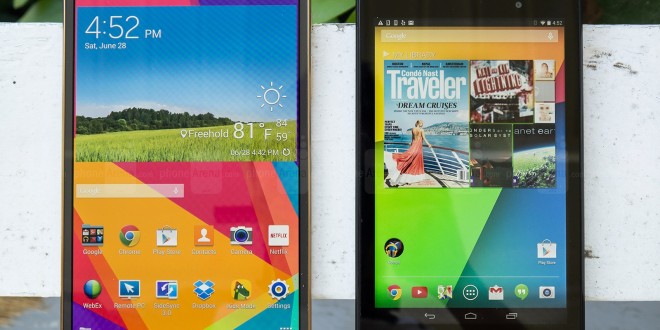 I’ll be honest with you guys and straight up tell you that I’m looking to buy a tablet, or a convertible. That’s why I’ve been spending my days researching and comparing tablets, to see which one would suit my needs best. This time, I’ve come across the Nexus 7 from Google and the Galaxy Tab S 8.4 from Samsung and I’m trying to find out which of the two is more future proof and more powerful.

The Nexus 7 is a really appealing device to me, because I love Android OS and the Nexus 7, being from Google, allows me to receive updates directly from the source and faster than on other devices which need their OEMs to send them the updates. On the other hand, Samsung is one of my favorite OEMs, because I’m used to getting high quality products for a fair price. Except for their smartphone line, I’m not particularly intrigued by that. The Nexus 7 will set you back about $230, but the Nexus 9 from HTC seems to be on the way, so we might not get the chance to purchase a Nexus 7 from Google directly.Still, if you do decide to get one later, you’ll surely find a way to get it. The Galaxy Tab S is a bit more expensive, retailing for $400. 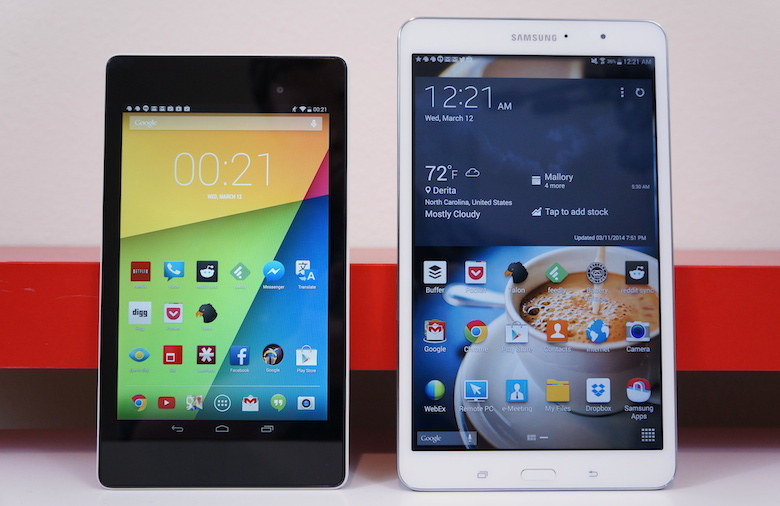 First off, let’s start with size and design. The Nexus 7 is from Asus, another company I’m very fond of because I’ve had a lot of experience with their laptop hardware and I’ve found it to be not only high quality, but extremely durable. The Nexus 7 has a plastic chassis with a soft touch back cover which looks quite nice and has a good grip to it, but the bezels on the device are on the heavy side, which might be bothersome for those of you who are used to thin bezels. The Samsung Galaxy Tab S 8.4 on the other hand, has thin bezels and a bigger screen to work with, but it still has a plastic chassis that doesn’t feel as smooth or soft as the Nexus 7.

The Nexus 7 has a 5 MP primary camera with autofocus and a 1.2 MP secondary camera, whilst the Galaxy Tab S has an 8 MP rear shooter with LED flash and a 2.1 MP front-facing shooter. The Nexus 7 has an acceptable camera compared to other compact tablets like the Amazon Kindle Fire HDX and HP Slate 7. The Galaxy Tab on the other hand outdoes most compact tablets with its camera.

Clearly, if you’re searching for a top-notch tablet and you are willing to sacrifice a bit more money and a bit more space, the Galaxy Tab S is a pretty good choice when it comes to tablets. But if you are searching for a compact tablet which can easily fit anywhere and you can actually perform most of the tasks you would want from a compact tablet, the Nexus 7 should definitely be your choice. The Nexus 7 is one of the best and most affordable compact tablets on the market, and even though it falls behind the Galaxy Tab S, you have to take into consideration that it runs smoothly and performs necessary tasks fast.

The Nexus 9 is pegged for an October 8 launch at HTC’s Double Exposure event, so if you’re not looking for a compact tablet but you would like the stock Android experience of the Nexus 7, you should keep your socks on and wait just a bit more to see what Google has to offer with the 8.9 inch tablet. The Nexus 9 should be a more suitable competitor the Galaxy Tab S as well, and we are going to compare those two as well, as soon as we get enough confirmed specs on the Nexus 9.

Even though the Galaxy Tab S seems like a much superior device to the Nexus 7, the Nexus 7 is the best you can buy in its price range and it’s definitely worth its money, offering more than other 7 inch tablets have to offer. You will have to settle for bigger bezels, but you will have increased portability and stock Android to enjoy.

My life-long dream has been to test out every gadget on the market! Considering the fact that I've rapidly destroyed almost every gadget I've had so far, I'm not inclined to owning something, so my ideal outcome would be to have a different gadget each month. I'm really into smartphones, wearables and tablets and I love Playstation and Xbox, I'm sure I'll beat you at your own game (after a month of training... or two)
Previous Nokia Lumia Icon vs. Sony Xperia Z2
Next Japanese developer Nude Maker is working on a new horror franchise, called Project Scissors