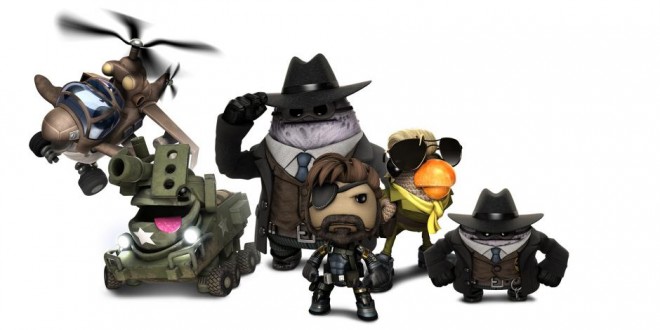 In recent Playstation news, upcoming puzzle-platformer, LittleBigPlanet 3 will be getting a brand new set of funny costumes, soon after the game will be officially released. “Some of you have been screaming to see more costumes for Sackboy’s new friends, so fresh from the Tokyo Game Show this past weekend, we are pleased to give everyone an exclusive teaser of some of our content plans for LittleBigPlanet 3.” So, the crew from Sumo Digital teamed up with the fellas from Konami to design a new rolling-on-the-floor funny costume pack – Metal Gear Solid 5: Ground Zeroes style. Sackboy and his three new friends, OddSock, Toggle and Swoop will be the future virtual proud owners of these outfits.

“Metal Gear Solid was one of the very first content packs that we released for the first LittleBigPlanet, so it seemed only fitting to team up with our good friends at Konami to bring you some brand new Metal Gear Solid: Ground Zero costumes for LittleBigPlanet 3,” as game community coordinator, Steven Isbell explains on the official Playstation blog. In other refreshing “funtastic” news on the game, Isbell also announced additional The Order: 1886 costumes for LittleBigPlanet 3 to be coming around February 2015, in sync with the anticipated action-adventure title. “What kind of mean teasers do you take us for? Of course we will be bringing Sir Galahad to LittleBigPlanet 3 with a special costume just for him!” So there you have it, Sir Galahad will also be “dressed and tressed” as a true Victorian Era gentleman.

LittleBigPlanet 3 is set to launch on November 18, this year. “We’re still working hard on finishing the game for its November 18th release but we thought that this blog post would help whet your appetite for some of the exciting costume ideas we have for Sackboy and his new friends,” Steven Isbell concluded. The game will be available on PS3 and PS4 platforms. The 1st Day Edition of the PS4 version will include a Dragon Age Costume Pack, with outfits based on the BioWare series.

I'm Razvan, a sports and first-person shooter enthusiast. I've always loved writing, even more so when it involves games. When I'm not playing on my PS3 or writing, I like to run exhausting cardio workouts, play soccer, watch a good movie, or read a good book.
Previous The Moga Rebel: Your iPhone game controller
Next Nexus 9 rumor round-up