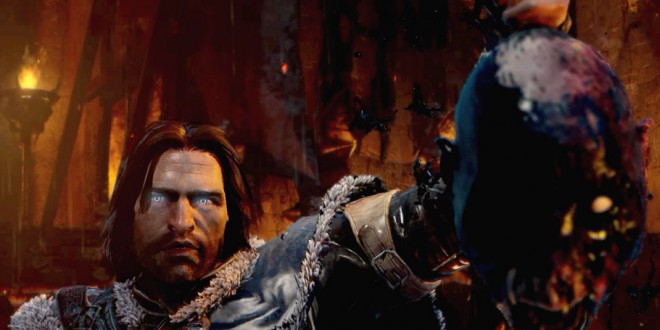 Middle Earth: Shadow of Mordor gets over 30 minutes of PC gameplay

Middle-Earth: Shadow of Mordor is the upcoming action-role playing title from Monolith Productions with a lot offer to this gaming genre. So far, the game has not been getting the attention it deserves, but this might be about to change after the 30 plus minutes of PC gameplay walk-through developers showcased at the Game24 Event. The fans will be seeing a “darker” Lord of the Rings game that will bridge the transition between the Lord of the Rings Saga and The Hobbit. Shadow of Mordor head designer and producer, Michael de Plater says the game is more focused on “the epic side of the story in the likes of Aragorn and Boromir,”

He wants to let fans know that this is not a game in which we will be seeing typical Lord of the Rings elements such as the hobbits or The Shire. The game’s story line is set right at the end of The Hobbit, after the battle of the five armies when Sauron suffers his big defeat. Shadow of Mordor’s main character, Talion will be facing many tough challenges throughout the vast Middle-Earth, and the players will spend good chunks of their time to weather the violent storms in which Talion will find himself for most of the time. The game will feature an advanced AI system called the Nemesis System which will memorize the player’s interaction with certain types of characters throughout the game, and will influence the way these characters will react to the player during his quests.

Monolith producers said earlier this year that the Nemesis System will be limited for the PS3 and Xbox 360 versions of the game due to its high level of complexity. As all next-gen game developers are planning on doing, Monolith said they are focusing more on Xbox One, PS4, and PC. Middle Earth: Shadow of Mordor borrows combat features previously seen in Batman Arkham Asylum and Assassin’s Creed combined with the original skill set Tallion possesses. The PC and Playstation 4 versions of Middle Earth: Shadow of Mordor are scheduled for September 30 this year, while the Xbox One version is set to come out on October 3rd. Last-gen PS3 and Xbox 360 will be seeing the game on November 18, respectively November 21st. Watch the Shadow of Mordor gameplay trailer below:

I'm Razvan, a sports and first-person shooter enthusiast. I've always loved writing, even more so when it involves games. When I'm not playing on my PS3 or writing, I like to run exhausting cardio workouts, play soccer, watch a good movie, or read a good book.
Previous Android L is coming on Samsung Galaxy S5 and Galaxy Note 4
Next New Dragonball Xenoverse characters and PC version announced by Bandai Namco