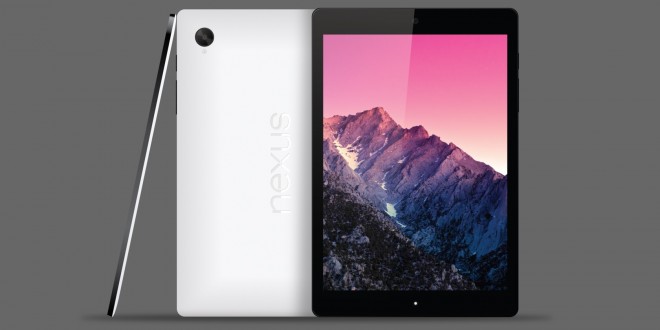 We’ve all been hearing rumors about HTC’s new tablet, the Google Nexus 9 lately, with many actually saying that there is a possibility that HTC will reveal the new device at the Double Exposure event on October 8 or at a special event on October 16. The Nexus 9 is said to be the firs device to come with Android 5.0 L (Lemon Meringue Pie, Lion, Lollipop) pre-installed.

The HTC Nexus 9 is once of the most anticipated tablets of the year, and many go as far as to say that it will compete (and beat) against the new iPad Air which is rumored to be announced on October 21 at an Apple event. The Nexus 9 will certainly face harsh competition from the iPad Air, Kindle Fire HDX 8.9, Samsung Galaxy Tab S and from Asus’ Transformer Book T100. Nonetheless, it will probably be the only tablet with stock Android 5.0 which is an enormous advantage in Android lovers’ eyes.

So far, we know that the Nexus 9 will probably weigh 418 grams, and will measure 7.8 mm in thickness, 22.6 cm height and 15.1 cm width. These measurements wouldn’t make it the thinnest and more maneuverable tablet in the world, with the Sony Xperia Z3 Tablet Compact having a much sleeker design, but it can still leisurely compete with the current generation iPad Air. The Nexus 9 is rumored to be made of aluminium unibody, which would be a considerable step up from the polycarbonate build of the Nexus 7.

The Nexus 9 will have an 8.9 inch QHD display with 340 ppi pixel density, although we don’t know whether we’ll get an IPS, LCD or Super AMOLED display. We are hoping for the latter since it looks great on the Galaxy Note 4 and Galaxy Note Edge, but it’s not a confirmed detail. According to NVIDIA itself, the Nexus 9 will sport the Tegra K1 processor clocked at 2.5 GHz, backed by 4 GB RAM and 16 or 32 GB internal storage. Hopefully, a microSD card slot will be included in the build, but it’s rather unlikely.

The Nexus 9 will reportedly have an 8 MP rear camera featuring Optical Image Stabilization and a 3 MP front camera. Rumors say the Nexus 9 might come close to being a convertible device, with a proprietary snap-on keyboard which might feature a number row besides the standard QWERTY keyboard. That would be a nice addition to the Nexus 9, because the new trend is convertible laptops and people are starting to pick up on devices like the Asus Transformer Book T100, TX300, Lenovo Yoga Pro 2, Lenovo Switch line, Dell Venue convertible line and more.

Even though we speculate on an October 8 announcement date, the Nexus 9 isn’t officially announced yet and a release date hasn’t been set by either Google or HTC. Others say that there will be a separate event held by HTC on October 16th, during which the Nexus 9 will be the main attraction. Nonetheless, it would be a welcome surprise to see the Nexus 9 earlier than expected and rumors say that Google will not only announce the Nexus 9, but it will also begin selling it at the same time. That would give the search giant an advantage in the front of the iPad Air 2 release. HTC will surely benefit out of the Nexus 9, if it proves successful, since the company has been struggling lately with their revenue and with their tablet lines.

My life-long dream has been to test out every gadget on the market! Considering the fact that I've rapidly destroyed almost every gadget I've had so far, I'm not inclined to owning something, so my ideal outcome would be to have a different gadget each month. I'm really into smartphones, wearables and tablets and I love Playstation and Xbox, I'm sure I'll beat you at your own game (after a month of training... or two)
Previous LittleBigPlanet 3 characters get hilarious MGS 5: Ground Zeroes outfits
Next Hoaxers claim that the iPhone 6 has a microwave charging feature