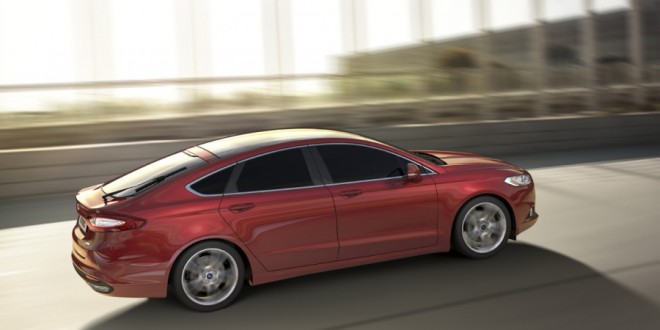 Ford Mondeo hits the brakes if a person pops up

I’m sure you are aware of the fact that not only watches and phone can be smart, but cars and planes,too. For example, the Google self-driving vehicle is one of the technological feats that probably won’t get approved soon, but it still demonstrates how a car can be as smart as a smartphone. The new Ford Mondeo is another example of a smart car, being able to detect if somebody pops ahead of it.

The new Ford Mondeo can actually see people on the road ahead and it can automatically hit the brakes in order to avoid an accident with tragic consequences. The Ford Mondeo will hit the brakes as soon as it notices that the driver isn’t responding to the alerts and signals. The new feature will come incorporated into a package deal into the new Ford Mondeo. The high-tech package that Ford will be supplying with the Ford Mondeo comprises of Pre-Collision Assist and Active Park Assist.

The Pre-Collision Assist feature on the Ford Mondeo will send audio and visual warnings to the driver when it detects a person in front of the car. In case the driver does not respond to these signals and actually wants to run somebody over, the Ford Mondeo will shorten the time required to apply the brakes by reducing the gap between brake pads and discs, after which it will apply the brakes by itself. Adaptive LED lamps are also incorporated into the design of the new edition of the Ford Mondeo, and they will be able to mimic daylight clarity through adjusted headlight beam and intensity.

The system on the Ford Mondeo can function in seven different modes, depending on speed, steering angle, distance to the vehicle in front, light conditions and windscreen wiper state. Perpendicular Parking is also one of the features incorporated in the Parking Assist package and will detect the spaces available and identify suitable ones for the Ford Mondeo. It will also reverse into these spots and park itself, if you are in a side to side or parallel space. The Ford Mondeo will also feature SYNC 2, which is a platform that offers navigation controls and speech recognition.

Besides packing considerable tech into the new Ford Mondeo, the company also plans on releasing the car with different engines from a 1 litre with 125hp to a 2 litre with 240hp engines, a low-carbon Econetic 1.6 litre diesel model that has only 94g per kg CO2 emissions for those of you who want to be a bit more eco-friendly and protective of the environment. The company is also planning to launc a Hybrid Ford Mondeo with a 1.4 kWh kithium-ion battery. The Ford Mondeo packs a lot of punch, but we don’t know whether the tech will help its popularity since people are increasingly focusing on other types of vehicles like SUVs and crossovers. The Ford Mondeo will go on sale later this year for around $31.000.

My life-long dream has been to test out every gadget on the market! Considering the fact that I've rapidly destroyed almost every gadget I've had so far, I'm not inclined to owning something, so my ideal outcome would be to have a different gadget each month. I'm really into smartphones, wearables and tablets and I love Playstation and Xbox, I'm sure I'll beat you at your own game (after a month of training... or two)
Previous Motorola Droid Turbo and Moto S photos leak
Next Xbox One launches next week in China with a lineup of 10 games