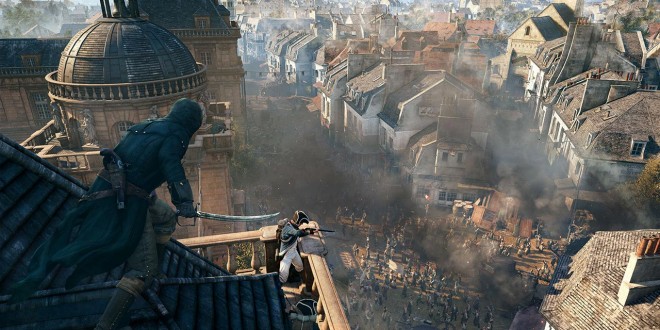 Ubisoft does not seem to be taking any time out from “antagonizing” Assassin’s Creed fans. Their latest ingenious idea involves an evening stroll around Paris to uncover interesting events and secrets of the French Revolution. Project Widow, as it is called, is a 3D online tour of Paris via Google Maps narrated by actor Andy Serkis, which will take you throughout the French Capital to get a sense of what the real French Revolution was like. Players will get a 360 street view of famous places in Paris and key locations of the Revolution in which battles were won and lost. With this online memorabilia, Ubisoft developers will like to keep us engaged and intrigued vis-a-vis the things to come in the upcoming title.

You will take part in an interesting history lesson of 18th Century France, deeply affected by the Revolution. Project Widow prepared a total of 119 memories for those interested viewers, which will be pilling up as you move along. Every single one will be narrated, insightful information will be provided along with in-game photos depicted from that period. On top of that, new Assassin’s Creed Unity trailers and videos will be waiting for you. You will stumble across notorious characters of the time, such as Le Marchise de Sade, Queen Marie Antoinette, and many more. You will be able to get inside La Bastille, Palais Royal and other key locations. Secrets will be unraveled, memorable battles, passages, and conspiracies from that period – things we will surely see in the new Assassin’s Creed.

Jodie Brock, the creative director of Project Widow shared the following: “We wanted to inspire gamers by breathing vivid bloody life into 18th century Revolutionary Paris, and allow them to explore its secrets, generating even more excitement about the game.” Assassin’s Creed Unity will take players inside the French Revolution to fight along Arno in his epic trials to claim the much earned right to “Liberté, Égalité, Fraternité” for him and his people. The game is set to launch on November 11 in the US and November 13 in Europe. Assassin’s Creed Unity will be available on PC, PS4 and Xbox One. Take a tour if you find the time – Project Widow

I'm Razvan, a sports and first-person shooter enthusiast. I've always loved writing, even more so when it involves games. When I'm not playing on my PS3 or writing, I like to run exhausting cardio workouts, play soccer, watch a good movie, or read a good book.
Previous Garmin opening up to developers
Next iCloud breach was actually Apple’s fault