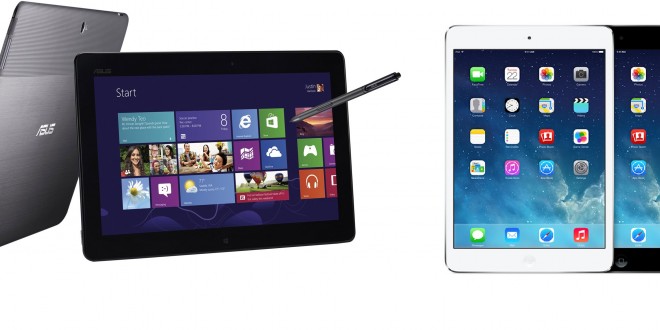 Tablets are not the most popular devices you can think of, but they still manage to cough up a lot of revenue, with Apple leading numbers with the iPad Air and the iPad Mini series. Other companies like Google, Samsung and Amazon trail behind with releases like the Nexus 7, Nexus 10, Galaxy Tab S and Kindle Fire HDX. Asus is also a company that has tried its hand at tablets and the Asus Vivotab Note 8 is one of the best examples of Asus hardware, besides the Transformer Book T100 and Transformer series.

The iPad Mini 2 comes as the successor of the iPad Mini, with a Retina display added in for better visibility, resolution and overall screen quality. The iPad Mini 2 was launched in October 2013 and rumors say a new iPad Mini is in the works from Apple, set to launch at the beginning of 2015. The iPad Mini 2 was well-received by the general public and many say that it is one of the best compact tablets you can find on the market.

The Asus Vivotab Note 8 was launched in February 2014 and was quickly picked up by many tech enthusiasts who wrote pretty positive reviews after extended use. The most notable feature of the Asus Vivotab Note 8 is that it has a pretty good battery life and it’s quite the maneuverable device. If you are searching for a compact tablet and have already reviewed the iPad Air, Samsung Galaxy Tab S, Amazon Kindle Fire HDX, Asus Transformer Book T100 and Lenovo Yoga, and still haven’t found your perfect fit, you should definitely check out the iPad Mini 2 and the Asus Vivotab Note 8.

The iPad Mini 2 measures 20 cm in height, 13.5 cm in width and a mere 7.5 mm in thickness. The iPad Mini 2 sports a 7.9 inch Retina display with 1536*2048 resolution and 324 ppi pixel density. Many have praised the display on the iPad Mini Retina because it offers excellent brightness, vivid colors and pretty good outdoor visibility. The Asus Vivotab Note 8 measures 22 cm in height, 13.2 mm in width and 10 mm in thickness. The tablet has an 8 inch LCD screen with 1280*800 resolution and 188 ppi pixel density. If you are looking for a tablet with a beautiful screen and high pixel density, packed into a small and thin build, the iPad Mini 2 would clearly be the better choice since it packs a superior screen with higher resolution and pixel density than the Asus Vivotab Note 8.

As for performance, the iPad Mini 2 is powered by Apple’s dual core A7 chipset, backed by 1 GB RAM and is available in 16, 32, 64 and 128 GB storage configurations with no microSd card slot available. The Asus Vivotab Note 8 on the other hand, is powered by a slightly more powerful quad core Intel Atom Z3740 CPU backed by 2 GB RAM and available in 32 GB storage configuration with expansion possible via a microSD card. If you look at these specs, the Vivotab Note 8 should fare just a bit better than the iPad Mini 2, but truth is that there’s no significant difference between the two, you could even say that the A7 chip on the iPad Mini 2 runs smoother than the one in the Vivotab Note 8. OS is a big part of performance, though. The iPad Mini 2 runs on iOS 7 out of the box, upgradable to iOS 8, whilst the Vivotab Note 8 runs on Windows 8.1. Both operating systems have been known to work really well and smooth, and that’s the case with our two tablets as well.

Overall, the winner of this comparison would be the iPad Mini 2, mostly because of its better screen, better camera performance and more ergonomic design. The battery on the iPad Mini 2 is also said to hold out for around 10 hours, whilst the Asus Vivotab Note 8 will fare a bit worse, lasting for up to 8 hours on a single charge. Price-wise, the Asus Vivotab Note 8 will set you back $280, whilst the iPad Mini 2 costs around $400 on BestBuy. Thus, we can conclude that if you want a cheap device which can accomplish all the tasks you need it to and has a Wacom stylus included, and you’re content with lower resolution and the developing Windows app store, the Asus Vivotab Note 8 should be your first choice. Although media viewing will not be as great as on the iPad Mini 2, the Vivotab will do just fine for average use. On the other hand, if you want a premium device with a better screen, better camera and good performance at the same time, and don’t mind being locked into the Apple ecosystem, the iPad Mini 2 should be your best option out of the two.

My life-long dream has been to test out every gadget on the market! Considering the fact that I've rapidly destroyed almost every gadget I've had so far, I'm not inclined to owning something, so my ideal outcome would be to have a different gadget each month. I'm really into smartphones, wearables and tablets and I love Playstation and Xbox, I'm sure I'll beat you at your own game (after a month of training... or two)
Previous Emblem Editor will be available in CoD: Advanced Warfare
Next OPPO N3 to be available with two different builds