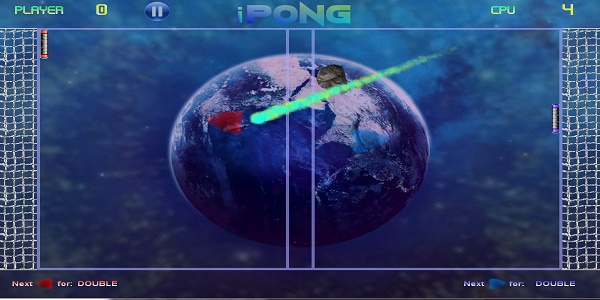 Indie developer releases iPong, a reboot of the Atari classic

Indie developer Soloweb developed a remastered edition of the Atari classic, “Pong”. The game was developed with a low-budget and is intended as a reboot of the original. Without any connection to Apple or their products, the developer named their game “iPong”.

According to Soloweb, iPong is set into the future, as every existing race is fighting for the power to rule over the Universe. Among the races, the most notable are the Humanoids, the Trolls and the Skulls. The fights are done through a tournament of iPong, which is basically the same kind of table tennis simulation that was present in the classic game. Players are taking the role of the human competitor, playing for the supremacy of this race.

iPong will feature HD graphics, an original soundtrack described by Soloweb as ‘epic’, power-ups that help you progress through the game, an arcade mode and an online multiplayer mode. You can play iPong in a single player mode, against the computer, through a local co-op or through a cross-platform multiplayer. The game is available on PC and Mac and it costs $2.5. Soloweb announced that they are also considering a release on mobile platforms. In other words, you can expect iPong on Android an iOS devices soon as well.

While at first, a reboot of Pong seems like a simple game that doesn’t have anything interesting to bring, after you check out the released materials on iPong, your opinion might change a little. The multiplayer modes alone make the game a must-have for players who like to compete against each other online. It’s true, iPong is not one of those AAA titles that everybody buys and plays online, but for what it offers it’s a good value. Furthermore, besides all these features, the game is worth it even if just for the nostalgia factor.

I'm a journalism graduate and an occasional gamer. As a kid I used to own a NES clone called "Terminator 2", which was hugely popular in my country. I like old school games and adventure games but I occasionaly play RPG's and Shooters as well, though I wouldn't call myself an expert at these kinds of games. When I'm not writing or playing games I prefer reading detective or fantasy novels.
Previous 7 reasons why everyone needs to play THQ’s A-RPG Titan Quest
Next Galaxy Note 4 vs OnePlus One – behemoth battle