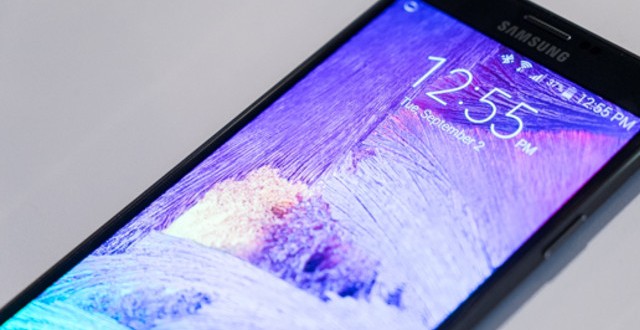 The Samsung Galaxy Note 4 was officially launched earlier today, a bit sooner than previously announced. This decision came as a result of Samsung’s desire to catch up with the iPhone 6 and iPhone 6 Plus in terms of sales. However, Samsung should have waited a bit longer it seems, as the first users who got their hands on the Samsung Galaxy Note 4 are already complaining about it. Multiple users from South Korea have reported that the phablet has a gap between its screen and the frame. Just to give you an idea about how wide this gap is, the users are saying that you can fit two sheets of paper or a business card in there. Strangely enough, the gap is located along one of the sides on some devices while on others it can be found at the top or the bottom.

Samsung hasn’t issued a statement regarding the matter as of yet, but they are bound to say something if more users will report the problem. The iPhone 6 also came with its own problems at launch, albeit of a different nature. Following several complaints coming from upset users, Apple came out and said that the issue is only affected a very small portion of the devices so it’s not a widespread problem. We’re not sure if this is also the case with the Samsung Galaxy Note 4, but we’re likely to find out sooner or later. In any case, this will deal a pretty big blow to Samsung and we can expect some people to refrain for purchasing the Samsung Galaxy Note 4 until they are certain that the problem was fixed. This is exactly why Samsung must release an official statement explaining the situation and it would be ideal if they would do it sooner rather than later.

The Samsung Galaxy Note 4 will only launch on October 14th in the US. The device can already be pre-ordered from any of the country’s  four major carriers.

I’m Load The Game’s co-founder and community manager, and whenever I’m not answering questions on social media platforms, I spend my time digging up the latest news and rumors and writing them up. That’s not to say I’m all work and no fun, not at all. If my spare time allows it, I like to engage in some good old fashioned online carnage. If it’s an MMO with swords and lots of PvP, I’m most likely in it. Oh, and if you’re looking to pick a fight in Tekken or Mortal Kombat, I’ll be more than happy to assist! Connect with me by email markjudge (@) loadthegame.com only
@@MarkJudgeLTG
Previous The Evil Within gets new trailer with three minutes of gameplay action
Next Destiny and Call of Duty servers taken down by DDoS attacks