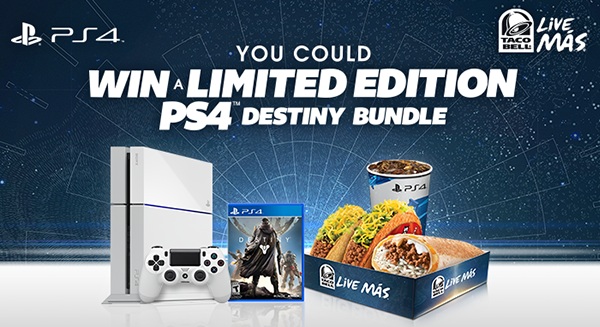 Sony will be teaming up with Taco Bell for a very special promotion starting next month. The promotion kicks off on October 9th and you can enter it by purchasing a Big Box from any Taco Bell. You will receive a code with your purchase, which gives you the chance of winning a Destiny PS4 bundle. And not just any PS4 console mind you, but the limited edition white one  The bundle is usually priced at $450 while a Big Box costs much less than that so it’s definitely worth giving a shot, especially since Sony and Taco Bell will throw in a few other surprises as well if you win.

More specifically, your prize will consists of the following: a white PS4 console complete with White DualShock 4 controller, a copy of Destiny for the PS4, a 30-day PlayStation Plus membership (for new PS Plus members only) and a voucher for the Destiny Engram Gear Pack. Moreover, you will also receive two vouchers, which can be used by your friends to download a digital copy of Destiny PS4. The copies you gift to your friends also include the Engram Gear Pack. Taco Bell mentions that official codes for the promotion are also available without purchase. “A potential winner will be notified on an average of every 15 minutes during the promotion. No purchase necessary to enter or win. Open to legal residents of the 50 United States and D.C. (excluding Hawaii) who are at least 18 years of age at time of entry. Void where prohibited,” the disclaimer reads.

This Destiny PS4 promotion will only last until November 19th. For more information regarding the rules and additional details check out this post on the PlayStation blog or the official Taco Bell website. Stay tuned as we bring you all the latest news and updates.

I’m Load The Game’s co-founder and community manager, and whenever I’m not answering questions on social media platforms, I spend my time digging up the latest news and rumors and writing them up. That’s not to say I’m all work and no fun, not at all. If my spare time allows it, I like to engage in some good old fashioned online carnage. If it’s an MMO with swords and lots of PvP, I’m most likely in it. Oh, and if you’re looking to pick a fight in Tekken or Mortal Kombat, I’ll be more than happy to assist! Connect with me by email markjudge (@) loadthegame.com only
@@MarkJudgeLTG
Previous Moto X 2014 vs. LG G3 – icon vs fresh
Next Moto 360 software update improves battery life