Breaking News
Home » Tech » Microsoft announces Windows 10, there will be no Windows 9 after all 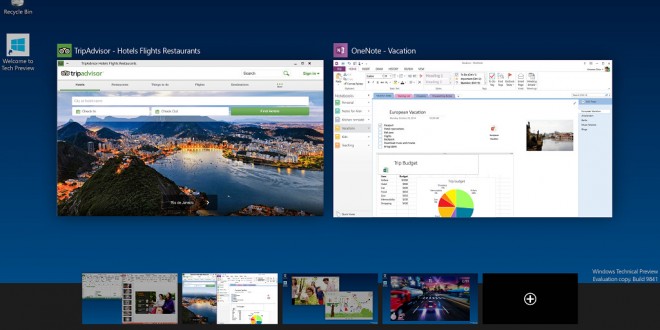 Microsoft announces Windows 10, there will be no Windows 9 after all

The next version of Windows was finally revealed earlier today by Microsoft at their San Francisco conference. The last major version of the operating system was Windows 8 so naturally, we expected the next one to be called Windows 9. Well, it seems like Microsoft decided to skip a number for whatever reason and announced Windows 10. I’m pretty sure no one expected this so if Microsoft’s plan was to surprise us, it certainly did a very good job. The company says that Windows 10 is their  “most comprehensive platform ever” and “will run on the broadest types of devices ever.” Interestingly enough, the operating system will have a unique user interface depending on the type of device you’re running it on. Examples of devices running Windows 10 at today’s conference include a smartphone, a tablet, a laptop, a desktop PC and a TV with an Xbox One below it.

Most people will be happy to know that the start menu will return in the next version of Windows, although it will look a bit different from what you’d expect. Windows 10’s start menu is basically a combination between Windows 7’s start menu and Windows 8’s user interface. The start menu “gives the familiarity of Windows 7 with some of the elements of Windows 8,” according to Microsoft. Windows 7 users will “get a familiar experience on the devices they already have. We want all these Windows 7 users to have the sentiment that yesterday they were driving a first-generation Prius… and now with Windows 10 it’s like a Tesla. They don’t have to learn any new way to drive.”

I’m Load The Game’s co-founder and community manager, and whenever I’m not answering questions on social media platforms, I spend my time digging up the latest news and rumors and writing them up. That’s not to say I’m all work and no fun, not at all. If my spare time allows it, I like to engage in some good old fashioned online carnage. If it’s an MMO with swords and lots of PvP, I’m most likely in it. Oh, and if you’re looking to pick a fight in Tekken or Mortal Kombat, I’ll be more than happy to assist! Connect with me by email markjudge (@) loadthegame.com only
@@MarkJudgeLTG
Previous Motorola Droid Turbo rumor round-up
Next Battlefield 4 now available as a free trial for PS Plus members