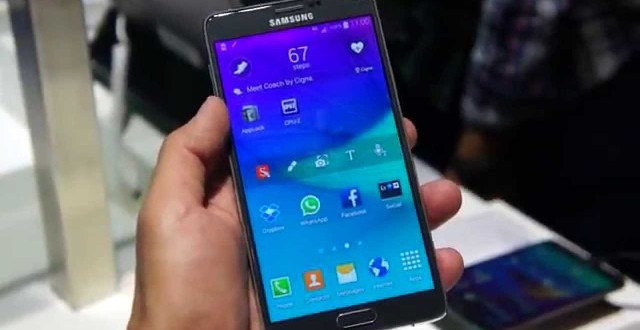 The battle between the Samsung Galaxy Note 4 and the iPhone 6 continues as Samsung launches a new ad aimed at showcasing the pahblet’s resistance. The Korean tech giant is well known for taking stabs at rival Apple whenever it has the chance. There are numerous ads in which Samsung smartphones are marketed as being better than iPhones and this one is no different. As you may or may not know, some users have been complaining that the iPhone 6 and iPhone 6 Plus (the latter in particular) bends in their pockets. Many companies have already taken advantage of the situation and poked fun at Apple because of this, but Samsung really takes it to a whole new level. The latest Samsung Galaxy Note 4 ad shows the phablet undergoing a three-point bend test as well as a test that simulates a 100 KG person sitting on it.

The device seems like it’s not affected at all by these tests so we can only conclude that it’s unlikely to bend in your pocket any time soon. While the ad doesn’t mention the iPhone 6 by name, the reference is pretty clear if you ask me. Apple stated that the problem is rare and that very few users complained about it, but that clearly didn’t stop Samsung from reminding everyone about the ‘bendgate’ once again. Ironically, the Samsung Galaxy Note 4 is not without flaw either and several users have been complaining about the fact that the device has a gap between its screen and one of the edges.

Samsung said that this is in fact not an issue, but rather part of the overall design. Indeed, even the Samsung Galaxy Note 4’s user manual mentions the gap at one point. However, owners of the phablet are most definitely not happy about this and some have even tried to get Samsung to replace their devices.

I’m Load The Game’s co-founder and community manager, and whenever I’m not answering questions on social media platforms, I spend my time digging up the latest news and rumors and writing them up. That’s not to say I’m all work and no fun, not at all. If my spare time allows it, I like to engage in some good old fashioned online carnage. If it’s an MMO with swords and lots of PvP, I’m most likely in it. Oh, and if you’re looking to pick a fight in Tekken or Mortal Kombat, I’ll be more than happy to assist! Connect with me by email markjudge (@) loadthegame.com only
@@MarkJudgeLTG
Previous Cyanogen won’t be bought by Google
Next Pillars of Eternity is the latest game to be delayed until 2015