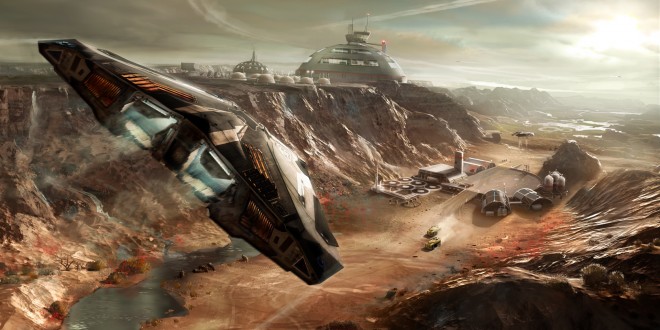 Elite: Dangerous is perhaps regarded as a less popular space trading and combat MMO to be released this winter on Windows PC and OS X. Frontier Developments has come out with fresh news on their Milky Way inspired galaxy: the Elite: Dangerous Beta 2 version is now available and the Beta 3 is on its way. The new Beta version brings major updates to the game, including new ships, new outposts, and more chunks of the galaxy awaiting to be explored. This open-ended space simulator also features a persistent universe concept, as seen in Star Citizen, but not at a such complex extent. Still, the game is no joke, and will feature a solid gameplay with various in-game tools and a vast intergalactic playground as you will see in the new “Beta 2 – More of Everything” trailer.

Here are the new updates included in the Elite Beta 2:

• New progression, with combat ratings from ‘Harmless’ up to ‘Elite’.
• Reputations per system and per faction that influence attitudes and prices offered to players.
• 570 star systems and 381,033 cubic light years to explore.
• Discovery, exploration and charting of new systems and the option to trade gathered data.
• Detailed system maps.
• New Outposts (small, exposed ‘roadside café’ stations in remote systems).
• New Ocellus starport.
• Further upgradeable Life Support modules, Engines, Hyperdrives, Power Distributors, Sensors, Shield Generators and Cargo Racks for all ships.
• New weapons, including mines and a Cargo Hatch Limpet built for non-lethal piracy.
• Visibility of other ships in supercruise, and the ability to track pilots through supercruise and hyperspace.
• In-game GalNet news feed, reporting story events from around the galaxy and each system.
• Gradual ‘wear and tear’ on ships.
• New Lakon Asp Explorer ship.
• All backers names from the appropriate crowd-funding reward tiers have been added to the NPC naming database.

The Beta 2 version of Elite: Dangerous will also include other improvements and optimizations, such as additional rock, ice and metal-rich planetary rings, new music, optional ‘simulator’ tutorials and optional pre-flight control checks. SLI/Crossfire support allows play in 4K ultra-high definition (with appropriate hardware). The Beta 3 version has been announced for October 28, while the final version of Elite: Dangerous will be released in Q4 of 2014. Check out the new “Beta 2 – More of Everything” trailer below:

I'm Razvan, a sports and first-person shooter enthusiast. I've always loved writing, even more so when it involves games. When I'm not playing on my PS3 or writing, I like to run exhausting cardio workouts, play soccer, watch a good movie, or read a good book.
Previous Legend of Grimrock sold almost One Million in copies
Next Styx: Master of Shadows gets a launch trailer