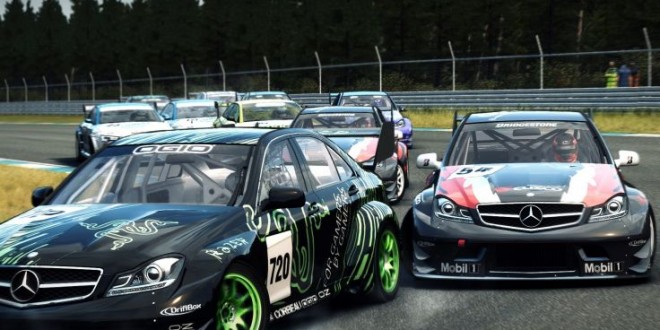 Codemasters announced today on their official blog that the PC version of Grid Autosport will be flirting with Virtual Reality. Ben Walke, Codemasters community manager stated that their racing simulator will be supporting Oculus Rift VR kits DK1 and DK2, which are reportedly working quite well in tandem with the game. “We’ve been tinkering with VR for a while now and have reached the stage where we believe it’s working pretty well, and as such, we’ve decided to allow you to experience it for yourselves.” The VR support is not yet fully sorted out, so there are a few recommendations and step by step instructions users will need to follow in order to have an optimal game experience.

“We have tested both the DK1 and DK2, and released support using SDK 0.4.1, which contains the Direct to HMD rendering mode, as well as extended desktop mode. We recommend using the Direct to HMD mode. This support is only experimental, and as such, there are some in-game options that may cause crashes if you try to change them in game: examples of these are changing resolution, and resizing the window,” Walke elaborated. Players are also advised to run the game in the Ultra-low graphics preset, particularly for the DK2 VR headset, to allow an optimal gameplay frame rate (60 FPS for DK1, and 75 FPS for DK 2). If the game performs well on these graphics settings, the player can gradually turn up the visual features and keep an eye on how well the game carries itself with the newly employed settings.

Developers warn that Grid Autosport will be highly demanding when played in VR mode, and users will need an incredible computing power to be able to light up the graphics settings way above the recommended minimum. That means that your PC will have to be fueled by a highly powerful CPU along with a high-end graphics GPU to get the job done. Still, even if your computer will be able to handle this immense computing load, and you will manage to amp-up  the graphics settings, you will still be required to follow a recommended settings list. You can get all the information you need regarding the Grid Autosport Oculus Rift Support on the official Codemasters blog. Happy VR gaming!

I'm Razvan, a sports and first-person shooter enthusiast. I've always loved writing, even more so when it involves games. When I'm not playing on my PS3 or writing, I like to run exhausting cardio workouts, play soccer, watch a good movie, or read a good book.
Previous Battlefield 4: Premium Edition release date announced
Next GTA 5 PS4 weights no less than 50 GB, supports motion control features