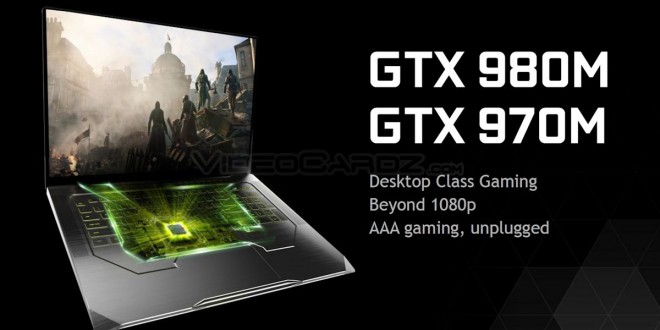 Share
Share on Facebook (3,195) Tweet (219)
When it comes to PC gaming, laptops have always had one major flaw over their Desktop brothers: battery life. While a gaming laptop can have some crazy specs that can easily surpass even the PS4 and XboxOne, the issue has always been that this experience can never be too far from a power source. And even with a source nearby, being unplugged never does quite offer the same exact experience.
Nvidia however says that this is the main issue they want to address with the new GeForce GTX 980M and 980M notebook graphics cards. They claim that both GPUs are not only the most powerful on the market for notebooks, but they also offer a number of features specifically made for power saving that let you game longer while unplugged and make the experience just as good on battery as it is when plugged in. The cards use Nvidia’s Maxwell architecture as to provide their performance boost, which is supposed to be at least double compared to that of previous generations. These cards support higher resolution than 1080p and with the new lighting techniques they offer more realism to the gaming experience. The hope is to make gaming on laptops as great a performance boast as is gaming on a PC.
One of the features mentioned previously is the upgraded BatteryBoost feature. Nvidia claims it will now automatically manage the games’ performance to provide a consistent experience when unplugged, while saving excess processing power, thus translating into a longer time away from an outlet. The system will cap frame rates while on battery, so a game will constantly run longer at 30 FPS as opposed to a higher frame rate that will drop at times and consume more battery.  Simply put, a gaming laptop that is not plugged in will have the same performance as an Xbox One or a PS4, at least framerate wise.
Even with these features, a gaming laptop is far from reaching the battery life of a MacBook Air or Windows Ultrabook, but if Nvidia’s boasts are to be believed, the new GTX cards will make a notable difference in where and for how long you can run your game.
GTX laptop Nvidia PC Laptop 2014-10-08
+Egon Kilin
Share

I’m Load The Game’s co-founder and community manager, and whenever I’m not answering questions on social media platforms, I spend my time digging up the latest news and rumors and writing them up. That’s not to say I’m all work and no fun, not at all. If my spare time allows it, I like to engage in some good old fashioned online carnage. If it’s an MMO with swords and lots of PvP, I’m most likely in it. Oh, and if you’re looking to pick a fight in Tekken or Mortal Kombat, I’ll be more than happy to assist! Connect with me by email markjudge (@) loadthegame.com only
@@MarkJudgeLTG
Previous 2014 Video Game Contributions on Kickstarter are down
Next The Witcher 3: Wild Hunt will not suffer a visual downgrade