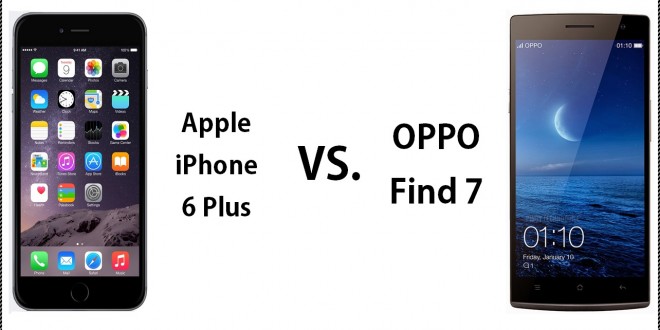 iPhone 6 Plus, the popularity king vs Oppo Find 7, the acclaimed underdog

iPhone 6 Plus vs Oppo Find 7 – king vs underdog

The iPhone 6 and iPhone 6 Plus seem to be all the rage at the moment, seeing as they are the newest iteration of design and performance from Apple. The iPhone 6 and iPhone 6 Plus come as two new flagships from the company, targeted at Apple fans as well as people who would like to upgrade from other Android or Windows running phones. The addition and launch of iOS 8 only adds to the popularity of the handsets, since iOS 8 brings a lot of new features (and bugs) to the average iOS user. Features on iOS 8 come as upgrades aimed to include functions that were desired by Apple users for a long time, such as third party keyboards, some widget and notification integration and overall better integration among devices, as well as Apple Pay, the company’s new mobile payment system.

The Oppo Find 7 is a more veteran device which has been on the market for quite some time now, and comes as the underdog flagship, with an acceptable price, some nice features like an LED notification light which is stylish enough to convince people to get the flagship, as well as a sleek Android interface. The Oppo Find 7 and Find 7a are iterations of how underdog companies and phones, generally, can become widely known and popular, as long as they bring good performance and style to the market. Today, we are comparing the iPhone 6 Plus, the current king of popularity with the Oppo Find 7, a critically acclaimed underdog of smartphones.

The iPhone 6 Plus is the phablet edition of the iPhone 6 aimed at people who would rather have a bigger screen to work with, and is among the most expensive phablets you can find out there. The iPhone 6 Plus retails for $750 for the 16 GB version, $850 for the 64 GB version and $950 for the 128 GB version, off-contract. The Oppo Find 7, on the other hand, retails for around $500, which makes it the better choice if you are on a budget and looking for a powerful phone with a big screen.

The Oppo Find 7 design features a plastic chassis with a few metal inserts in the frame and a slightly curved back and edges. The Find 7 has a 5.5 inch IPS LCD screen with a 1440*2560 resolution and 534 ppi pixel density, which kind of eats away at its battery, but not so much as to need a recharge every night with mixed use. The iPhone 6 Plus has a 5.5 inch Retina display with 1080p resolution and 401 ppi protected by an oleophobic coating and shatter proof glass. The iPhone 6 Plus has an aluminium unibody, slightly superior to that of the Oppo Find 7.

Touch ID, 1 GB RAM, Apple’s new dual core A8 CPU and PowerVR GX6650 GPU with either 16, or 64 or 128 GB storage space, with no microSD card slot are the most important specs of the iPhone 6 Plus. The Find 7 sports a Snapdragon 801, Adreno 330 and 3 GB RAM for the single 32 GB internal storage version, expandable via microSD. In terms of performance, we have found that the Oppo Find 7 tends to have trouble with graphics-intensive games like Asphalt, but only sometimes, so the issue shouldn’t necessarily be a deal-breaker. The iPhone 6 Plus, on the other hand, does encounter some bugs and issues when in apps and some connectivity issues with Bluetooth, but those are mainly caused by iOS 8 and updates have already fixed the majority of problems reported by users.

The Oppo Find 7 comes with Android 4.3 Jelly Bean out of the box, but you can update that to Android 4.4 KitKat, overlaid with Color OS, which offers a pretty smooth experience, even tough it might seem a bit cartoonish at first. If you are an Apple and iOS fan, the iPhone 6 Plus should clearly be your choice, but if you are an Android enthusiast and would rather work with an Android OS and the flexibility and customizability it offers, go for the Find 7 as it will suit you better. Apple is known for not including a lot of customizable features in their devices, and the iPhone 6 Plus doesn’t stray from that tradition, keeping users in the Apple ecosystem as well as with “stock iOS”, so to speak. Nonetheless, Apple fans should not be bothered by this, while Android fans should tread lightly and expect to have a few weeks of “getting used to it”.

The iPhone 6 Plus camera is an 8 MP rear shooter and a 1.2 MP front shooter. While the front shooter on the iPhone 6 Plus isn’t something to write home about, the rear iSight camera is known to perform surprisingly well, even in low light conditions. The Find 7 doesn’t lag around either, with a 13 MP rear camera and 5 MP front camera. While the 5 MP selfie-camera should cater better to those of you who take a lot of selfies, the rear camera isn’t bad either, taking pretty good low-light shots with fairly rare cases of overexposure. The cameras on the iPhone 6 Plus and Oppo Find 7 shouldn’t necessarily be determining in this comparison, because both are equally good. Nonetheless, if you’re looking for a selfie-phone, the Find 7 would be more suitable for your needs.

Overall, both the king of popularity, the iPhone 6 Plus, and the appreciated underdog, the Oppo Find 7, are great devices to choose as upgrades from current phones or even as your first smartphone, because they offer great performance, great cameras, average battery life and an overall great user experience. Now, it depends on whether you like Android or iOS and whether you want an ultra-bright screen which eats away at your battery or a Retina screen. Which would you choose and why?

My life-long dream has been to test out every gadget on the market! Considering the fact that I've rapidly destroyed almost every gadget I've had so far, I'm not inclined to owning something, so my ideal outcome would be to have a different gadget each month. I'm really into smartphones, wearables and tablets and I love Playstation and Xbox, I'm sure I'll beat you at your own game (after a month of training... or two)
Previous Mass Effect 4 will be featured in a panel at Honorcon 2014
Next Pre-order Resident Evil: Revelations 2 on PlayStation and get exclusive content