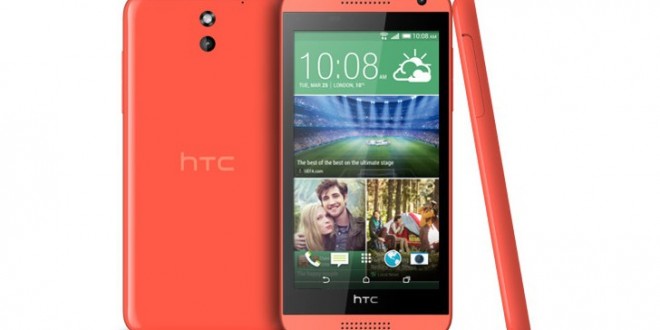 HTC has been in the news with its recent Double Exposure event held last week, where the company launched the HTC Desire Eye and the Re camera, two photography-oriented devices. Just a day after the mediated event, we found out that the HTC One M8 Eye variation we had been seeing was also launched in China, only to learn that for now, the HTC One M8 with a different camera setup, is exclusive to Asian markets. The HTC Desire 510 was launched in the USA at the end of September as a low-cost, entry-level smartphone. Now, the HTC Desire 510 has landed in Canada at TELUS.

The HTC Desire 510 can now be bought at TELUS Canada for free with a two-year contract or for $200 without a SIM card. The handset was cheaper when it was launched in the USA, where Boost Mobile is selling it for $100 off-contract. The HTC Desire 510 sports entry-level specs and is designed for customers that are either buying their first smartphone or want to get a device that does the minimum a smartphone should do, and then some.

The HTC Desire 510 is available in navy blue, white and grey, TELUS carrying the grey version at the moment. The HTC Desire 510 is a budget-centric smartphone with 4G LTE connectivity, and the first to use an all-new CPU from Qualcomm, the Snapdragon 410. The CPU is a 1.2 GHz quad core, optimized for 64 bit, and it’s backed by 1 GB RAM, 8 GB internal storage expandable via microSD card slot. The handset has a 4.7 inch display with 480*854 resolution and 208 ppi pixel density. It comes with an average 5 MP rear camera and a VGA front shooter, and is capable of 1080p video recording. The HTC Desire 510 is powered by Android 4.4.2 KitKat with Sense 5.5 overlaid and a pretty capable 2100 mAH battery.

The HTC Desire 510 is among the first 64-bit smartphones and based on various reviews, the device lives up to expectations, and even exceeds them a little when it comes to processing power and longevity. The only drawback that we found is the screen on the HTC Desire 510, which although is very good in direct sunlight, it seems dull and has rather unimpressive viewing angles. Clearly, the screen was one of the sacrifices HTC had to make in order to make this phone so affordable. Overall, it’s a dependable and future-proof device which will probably be among the first one to receive Android L Licorice by the time it’s out. Will you be buying one or is the HTC Desire 510 too rudimentary for you?

My life-long dream has been to test out every gadget on the market! Considering the fact that I've rapidly destroyed almost every gadget I've had so far, I'm not inclined to owning something, so my ideal outcome would be to have a different gadget each month. I'm really into smartphones, wearables and tablets and I love Playstation and Xbox, I'm sure I'll beat you at your own game (after a month of training... or two)
Previous Free OnePlus One “Insanity Week” giveaway announced
Next Wildstar will switch to Megaservers later this week