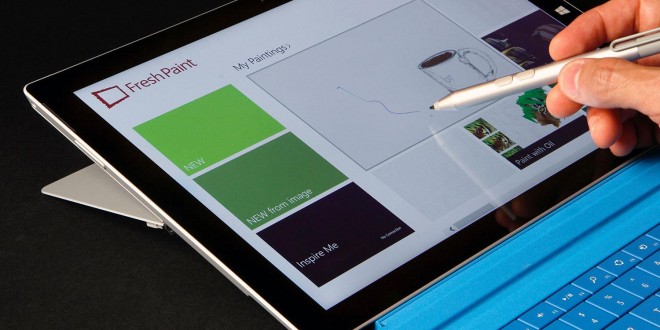 Surface Pro 3 users can now get the Surface Hub app

Microsoft was rumored to be cutting the entire Surface line earlier this month, but the rumor was quickly dismissed by the company, which in turn released the new Surface Hub application for the Surface Pen used on the Surface Pro 3 convertible notebook. Microsoft even went on to say that a future Surface device is already in the works, so Microsoft fans should not be worried that they were going to be left without any further upgrades. The new addition to the Surface line would be compatible with all Surface Pro 3 accessories, as per Microsoft.

The Surface Hub application has just been launched by Microsoft in the Windows Store and the app is made with Surface Pro 3 users in mind. The Surface Hub app allows users to customize their Pens according to their preferences. The Pen’s sensitivity can now be set via the Surface Hub app, which also allows for customization of the top button on the pen. You can now set the button to either launch the default One Note Desktop app or the One Note Modern app.

After a not-so-satisfying sales number for the Surface Pro 3 line, skeptics were convinced that Microsoft would be dropping its endeavors with the Surface line soon. Microsoft has responded to skeptics, saying that the Surface Pro 3 made off to a strong start in sales and the company expects those sales to rise in the near future. With the confirmation that another Surface gadgets is in the works, Microsoft is surely convinced that their business oriented slates would become successful in the end.

My life-long dream has been to test out every gadget on the market! Considering the fact that I've rapidly destroyed almost every gadget I've had so far, I'm not inclined to owning something, so my ideal outcome would be to have a different gadget each month. I'm really into smartphones, wearables and tablets and I love Playstation and Xbox, I'm sure I'll beat you at your own game (after a month of training... or two)
Previous Flight attendants want the FAA to reinstate the ban on electronics
Next Meizu MX4 Pro price, release date, specs leaked