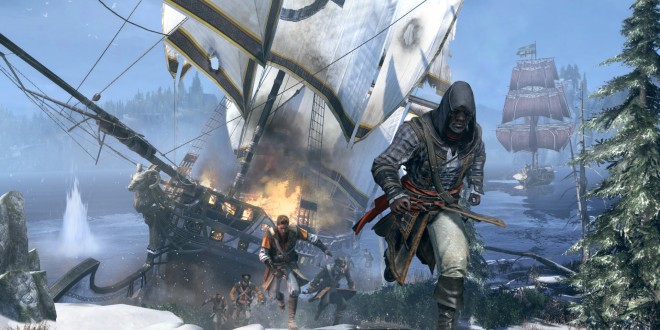 Publisher Ubisoft has released a fresh batch of screenshots and artwork pieces for its upcoming final chapter in the North American Assassin’s Creed saga, Assassin’s Creed Rogue. These latest screens depict various environments like a harbor or an industrial complex, protagonist Shay’s ship besieging a fortress or taking on other vessels, Assassin’s Creed IV: Black Flag’s Adéwalé, in addition to Assassin’s Creed III’s Achilles and Haytham (whom – strangely – looks older than in AC III).

Assassin’s Creed Rogue takes place in the mid-18th century during the Seven Years’ War, and follows Shay Patrick Cormac, an assassin-turned-templar. Shay is eventually betrayed and abandoned by the assassins after an assignment ends in disaster, and so turns to the templar order, offering his services as an assassin-hunter. Given access to near-limitless resources, Shay sets out to exact his revenge, with his actions having dire consequences for the future of the brotherhood. Gameplay in Assassin’s Creed Rogue will be similar to that of Assassin’s Creed IV: Black Flag, with a mixture of ship-based naval exploration and third-person land-based exploration. Additionally, familiar characters like Assassin’s Creed III’s Achilles Davenport or Haytham Kenway will also make a return.

For combat, Assassin’s Creed Rogue introduces an air-rifle, which allows the player to silently take out enemies at a distance. The air-rifle can be outfitted with a variety of different projectiles, such as firecrackers. The player can also use a grenade launcher, which fires off shrapnel-grenades and other loads. Enemy assassins feature archetypes similar to previous games, using skills that players have been using since the original game; they can hide in bushes, blend in with crowds, and perform air-attacks against the player.

Assassin’s Creed Rogue launches on November 11th in North America and November 13th in all PAL regions, on the PlayStation 3 and Xbox 360. A PC version has also recently been announced, and it’s scheduled for an early 2015 release.

I’m Load The Game’s co-founder and community manager, and whenever I’m not answering questions on social media platforms, I spend my time digging up the latest news and rumors and writing them up. That’s not to say I’m all work and no fun, not at all. If my spare time allows it, I like to engage in some good old fashioned online carnage. If it’s an MMO with swords and lots of PvP, I’m most likely in it. Oh, and if you’re looking to pick a fight in Tekken or Mortal Kombat, I’ll be more than happy to assist! Connect with me by email markjudge (@) loadthegame.com only
@@MarkJudgeLTG
Previous A new Destiny update is now available
Next AMD is setting up a new Never Settle game bundle