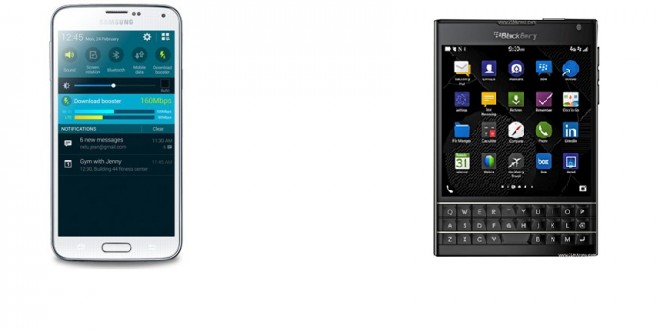 The BlackBerry Passport and Samsung Galaxy S5 are two flagships for 2014, which were not only widely anticipated but have been two successful devices appreciated by many who have already got their hands on them. While the BlackBerry Passport was launched just a few weeks ago, it became an instant hit thanks to its unique design and the bundle of features and service BlackBerry managed to put into the Passport. The Galaxy S5 is also a widely acclaimed handset, with most criticizing only the design choice for the handset. The BlackBerry Passport and Galaxy S5 are representative handsets for the companies that made this year and if you are set on getting your hands on a flagship device you can show off as well as benefit from, these two should definitely be on your list, alongside the Galaxy Note 4, iPhone 6 and 6 Plus and HTC One M8.

We are going to compare the BlackBerry Passport and Galaxy S5 in order to see which flagship would fit different kinds of users and see how the two handsets size up next to each other in design, specs as well as unique features. First off, let’s start by describing the BlackBerry Passport, since that’s the more recent device in the smartphone market, as well as the come-back attempt of the company. The BlackBerry Passport was designed for corporate, as well as leisurely users, and incorporates both a high quality touchscreen, as well as a QWERTY keyboard which can be used as a trackpad at the same time. The design of the BlackBerry Passport, while controversial and unconventional, is appreciated by many BlackBerry fans, as well as people used to other types of more conventional handsets. It’s a full square device, which is kind of on the hefty side, but still manages to be easily handled and used by any kind of people.

The Galaxy S5, on the other hand, has a smaller footprint and a more menial design, meaning that the all-plastic chassis of the device can be called inferior to the BlackBerry Passport aluminium design. The dimpled back on the Galaxy S5 has been the most criticized aspect of the handset, most people calling it a band-aid cover, and with good reason. While the design on the Galaxy S5 lacks the finesse of the BlackBerry Passport, it still hides a powerful device that will surely cater to your every need.

The BlackBerry Passport presumably features outstanding battery life. This feature will certainly come in handy in the competition against the iPhone 6, Galaxy Note 4, Moto X and Sony Xperia Z3. The Passport is said to last for 30 hours on a single charge, which is pretty darn impressive. We’ll have to wait and see whether it will live up to that number in real life situations. The BlackBerry Passport sports a 4.5 inch screen with 1440*140 resolution at 453 ppi pixel density and it can fit 60 characters wide per line. The device incorporates a quad core Snapdragon 801 CPU, Adreno 330 GPU, 3 GB RAM and 32 GB internal storage expandable via microSD card. The BlackBerry Passport has a 13 MP shooter on the rear and 2 MP selfie camera.

One of the cool apps you will be able to use as a medical professional on the BlackBerry Passport can actually offer 3D renders of X-rays and ultrasounds you can manipulate. There’s also a Bloomberg app, aimed at business users and Amazon app store for anything else you would want. BlackBerry Passport users will get a free app every day from the Amazon app store which is not bad at all. The BlackBerry Passport boasts with a QWERTY touch enabled keyboard, as the company calls it, and it’s a combination of a virtual and physical keyboard. It can also act like a touchpad and you can scroll content around by swiping over the keys and use swipes to select suggested words when typing. You will also have another row of virtual keys brought up when you are typing with punctuation marks and numbers. You can even use a cursor and move it around by swiping on the keys.

The Galaxy S5 has a 5.1 inch Super AMOLED screen with a 1080*1920 resolution and 432 ppi pixel density. The Galaxy S5 runs on a Snapdragon 801 CPU clocked at 2.5 GHz with Adreno 330 GPU, 2 GB RAM and either 16 or 32 GB internal storage expandable via microSD card,  a 16 MP rear camera with tons of features built in, including a pretty cool auto-focus capability, and Android 4.4.4 KitKat with Samsung’s TouchWiz UI on top. A fingerprint sensor and IP67 certification are also features present on the Galaxy S5, which make it a tad superior to the BlackBerry Passport.

With the Galaxy S5, you will benefit from apps like S Health, which makes use of the heart rate monitor embedded in the phone, below the rear camera. S Health 3.0 is a great upgrade and includes a calorie counter, pedometer, exercise tracking and more. Another neat feature of the Galaxy S5 is the Ultra Power Saving Mode, turning your screen black and white and will only let you use six essential apps of your choice. With the Ultra Power Saving Mode turned on, the Galaxy S5 will actually last for several days. Selective focus, called background de-focus, is another neat feature you can find in the camera app of the Galaxy S5.

As you can see, both the BlackBerry Passport and Galaxy S5 are powerhouses of their own, with unique features implemented. While the Galaxy S5 is more general consumer oriented, the BlackBerry Passport is more corporate and enterprise oriented, so you should mainly use that to decide which experience would suit you best. I would rather choose the BlackBerry Passport because I like its conventional design, and I tend to do my work on my phone, so the simple and useful OS would do better for me than Android and TouchWiz. On the other hand, I would like the great screen on the Galaxy S5, as well as the powerful interiors which will surely satisfy all my gaming needs. Which would you prefer?

My life-long dream has been to test out every gadget on the market! Considering the fact that I've rapidly destroyed almost every gadget I've had so far, I'm not inclined to owning something, so my ideal outcome would be to have a different gadget each month. I'm really into smartphones, wearables and tablets and I love Playstation and Xbox, I'm sure I'll beat you at your own game (after a month of training... or two)
Previous Nexus 6 vs Motorola Droid Turbo
Next Facebook vs Twitter – Latest stats and figures