Breaking News
Home » Tech » Samsung Galaxy S5 vs Sony Xperia Z3 – Out with the old, in with the new 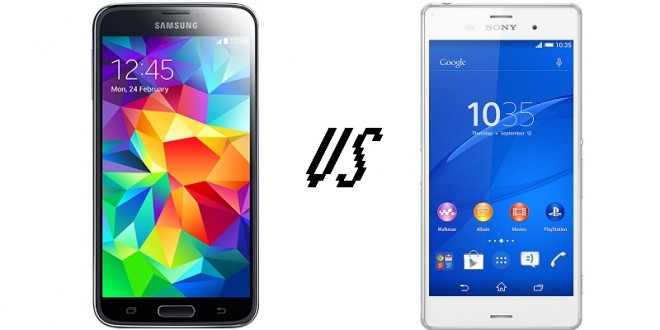 Samsung Galaxy S5 vs Sony Xperia Z3 – Out with the old, in with the new

Last month during the IFA Trade Show in Berlin we had the pleasure of seeing a bunch of new smartphones revealed including a few highly anticipated flagships. The Sony Xperia Z3 was one such device and although it doesn’t come long after its predecessor, it still features some improvements that make it stand out from the crowd. Most people would even say that it’s one of the best smartphones currently available on the market and I tend to agree. However, there are plenty of other great ones as well and the competition is fiercer than ever. Take the Samsung Galaxy S5 flagship for example. This device is almost seven months old, but it can still go head-to-head with most other smartphones out there, even recently released ones.

As mentioned, the two handsets are similar in terms of size, although they do look rather different from a design standpoint. The Samsung Galaxy S5 measures 142 x 72.5 x 8.1 mm, weights 145 grams and comes equipped with a 5.1-inch Super AMOLED display with 1080 x 1920 resolution and 432 pixel density. Meanwhile, the Sony Xperia Z3 is a bit heavier at 152 grams and a bit larger, but also slimmer at 146 x 7.2 x 7.3 mm. As for the screen, the device sports a 5.2-in Triluminos display with 1080 x 1920 resolution and 424 pixel density. Both smartphones feature water and dust resistance, although the Sony Xperia Z3 is IP68 certified while the Samsung Galaxy S5 is only IP67 certified . The difference between the two certifications isn’t all that significant unless you drop the phone in deep water as IP68 is resistant over 1 meter while IP67 goes only up to 1 meter.

Worth noting is the fact that Sony Xperia Z3’s battery features a STAMINA power saving mode and its battery life has an endurance rating of up to 85 hours. By comparison, the Samsung Galaxy S5 can only go up to 72 hours. In terms of variety, both smartphones come in several colors to choose from. The Sony Xperia Z3 is available in Black, White, Copper and Silver Green while the Samsung Galaxy S5 can be found in Charcoal Black, Copper Gold, Electric Blue and Shimmery White. As for the operating systems, both of them are Android smartphones of course, so both run on the latest version, Android 4.4.4 KitKat. However, the Sony Xperia Z3 runs on this version straight out of the box while the Samsung Galaxy S5 needs to upgrade to it as it initially runs on Android 4.4.2 KitKat.

Last but not lest, we have to talk pricing here as this is always one of the most important aspects. Since the Samsung Galaxy S5 has been out for several months already one can only image that the price has dropped quite a bit since launch. That’s certainly true and the 16GB  flagship smartphone currently costs around $600 unlocked, although you will be able to find some better deals from time to time. The Sony Xperia Z3 on the other hand is a bit more expensive, with prices starting at around the $800 mark unlocked. However, you can find some good deals here as well and Amazon offers the device quite a bit cheaper than that, albeit you won’t get a warranty so you would be buying it from the retailer giant at your own risk. In any case, the Sony Xperia Z3 is more expensive than the Samsung Galaxy S5, but that’s not too surprising seeing as how the device was only launched last month.

Bottom line? All in all, the Sony Xperia Z3 has quite a few advantages over the Samsung Galaxy S5. These include better battery life, bigger screen, more RAM, more mega pixels on the camera and better water resistance. Granted, the device is not exactly light-years away from its competitor as some of these advantages are barely noticeable. However, Sony’s flagship also incorporates glass and metal into its design which gives it a more premium look and feel compared to the Samsung Galaxy S5 which looks a bit cheap due to the plastic design. The latter undeniably offers a great bang for your buck and you can already get it relatively cheap if you know where to look. That being said, the Sony Xperia Z3 definitely seems like the better option between the two if you can afford to spend the couple of extra hundred bucks.

I’m Load The Game’s co-founder and community manager, and whenever I’m not answering questions on social media platforms, I spend my time digging up the latest news and rumors and writing them up. That’s not to say I’m all work and no fun, not at all. If my spare time allows it, I like to engage in some good old fashioned online carnage. If it’s an MMO with swords and lots of PvP, I’m most likely in it. Oh, and if you’re looking to pick a fight in Tekken or Mortal Kombat, I’ll be more than happy to assist! Connect with me by email markjudge (@) loadthegame.com only
@@MarkJudgeLTG
Previous Samsung announces new 60GHz Wi-Fi technology with speeds of up to 575MB/s
Next PS4 on 1080p vs Xbox One on 900p: Screenshot comparison