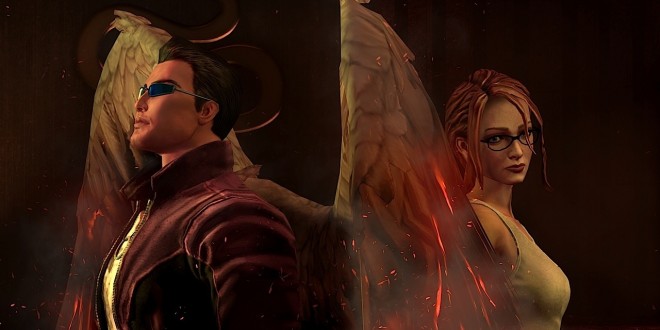 Saints Row Gat Out of Hell gets a new launch date

The official Saints Row Twitter account has just revealed Saints Row Gat Out of Hell will release one week earlier than anticipated. Originally scheduled for January 27th and January 30th, Deep Silver’s and Volition’s upcoming trip into hell will launch in January 20th in North America and January 23th in Europe, on the PlayStation 4, Xbox One, PlayStation 3, Xbox 360, and PC.

Saints Row Gat Out of Hell’s plot revolves around Johnny Gat’s attempt to rescue the leader of the Saints from Hell, after being captured by Satan. In Hell, Johnny Gat must reunite with deceased enemies of his past, as well as former Saints. Johnny and Kinzie find themselves in the city of New Hades, Hell. The player plays as Johnny Gat (or Kinzie Kensington in co-op). Five islands make up the city: Shantytown, Barrens, Downtown, Forge, and the Den, all surrounding Satan’s tower on a middle island. Unlike game progression in previous titles, players advance through the story by completing activities to fill a ‘Satan’s Wrath’ meter, which unlocks cut-scenes and further story elements. Saints Row Gat out of Hell shares most of its gameplay aspects with the previous installments, being primarily played as a third-person shooter in an open world map scattered with quests, secondary objectives, and various collectibles. Superhuman abilities return from SR IV. Saints Row Gat out of Hell also introduces ‘angelic flight’, giving wings to the player.

In December 2013, comedian Jay Mohr – who voiced antagonist Dane Vogel in Saints Row 2 – revealed he is doing voice-work for the next Saints Row game. It was later revealed Volition would be unveiling a new game at PAX Prime on the 29th of August, 2014. The publisher teased an image which depicts an Ouiji Board with the Saints fleur de lis on it. Later – at their panel on the same day – Volition and Deep Silver confirmed a standalone expansion to Saints Row IV, called Saints Row Gat out of Hell.

I’m Load The Game’s co-founder and community manager, and whenever I’m not answering questions on social media platforms, I spend my time digging up the latest news and rumors and writing them up. That’s not to say I’m all work and no fun, not at all. If my spare time allows it, I like to engage in some good old fashioned online carnage. If it’s an MMO with swords and lots of PvP, I’m most likely in it. Oh, and if you’re looking to pick a fight in Tekken or Mortal Kombat, I’ll be more than happy to assist! Connect with me by email markjudge (@) loadthegame.com only
@@MarkJudgeLTG
Previous Ubisoft considered bringing Vaas back before making Far Cry 4
Next Nexus 6 officially announced and detailed, runs on Android Lollipop